The fully air-conditioned train will operate twice a week and have a dynamic fare structure.
FPJ Web Desk 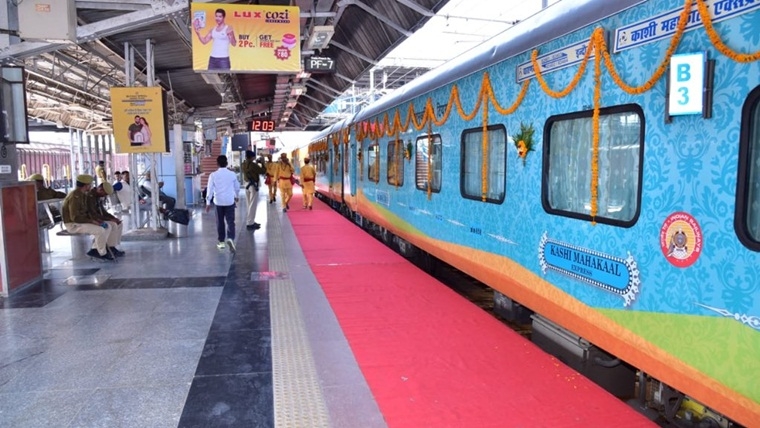 Madhya Pradesh's first corporate train, the Indore-Varanasi Kashi-Mahakal Express will commence operations from the Indore Railway station on Friday. The train is scheduled to departs from Varanasi at 2.45 pm

The train which had been inaugurated by Prime Minister Narendra Modi in Varanasi on February 16 is fully air-conditioned and is slated to operate twice a week.

The fare from Indore to Varanasi is Rs. 2016, including lunch, dinner and high tea, reported The Free Press Journal's Manish Upadhyay.

However, similar to the other two Tejas Express trains, the Kashi Mahakal Express too will follow a dynamic fare structure.

Ahead of its maiden journey, the train has received an overwhelming response from the public with as many as 612 bookings done by 7 pm on Wednesday, against the train's total carrying capacity of 648.

The super-fast fully air-conditioned passenger train, operated by the Indian Railway Catering & Tourism Corporation (IRCTC) will have an advance reservation period of 120 days. All passengers travelling on IRCTC trains will also be provided with a complimentary Rail Travel Insurance of up to Rs 10 lakh, said an official statement. IRCTC will also allow an automatic full refund of the train fare in case of cancellation of the train for both wait-listed and confirmed e-tickets.

Earlier, the train had made headlines after photos surfaced of a berth seemingly dedicated to Shri Mahakaal on the train. The IRCTC later clarified that this was only a one-time affair.

"The staff of new Kashi Mahakal Express train have temporarily put photos of Shri Mahakaal on an upper berth to do 'puja' and seek blessings for the success of the new project. It is meant only for the inaugural run as a one-time affair," IRCTC stated.

(With inputs from agencies and Manish Upadhyay)