“My journey has just begun, Punjab Congress’ new president Navjot Singh Sidhu said on Monday, a day after being appointed to the key post after months of a bitter, polarising spat between him and Chief Minister Amarinder Singh. The cricketer-turned-politician thanked the party leadership for appointing him head of the Punjab unit and said he would work with every “member of the Cong family” to fulfil the ‘Jittega Punjab’ mission and strengthen the party’s organisation in the state.

Kutch: At least 50 medical students in GK General Hospital run by the Adani Group in Gujarat’s Kutch district were hospitalised after consuming contaminated drinking water supplied to their college hostels. The video of the contaminated water supply in the medical college was widely shared by the students on social media. Admitting to the supply of polluted water, the college administration said the water supply from the Narmada had become irregular in the past few months. So, as a temporary solution, water from tube wells, which had high iron content, was being provided to the students.

15 dead in separate mishaps in UP, MP

Sambhal/Bhopal: Over 7 people died and 8 others injured in a collision between buses on the Agra-Chandausi Highway, police said on Monday. The accident occurred near Laharavan village in Uttar Pradesh’s Sambhal late on Sunday night when a bus carrying a marriage party was parked on the roadside due to a punctured tyre and it was hit by another, SP Chakresh Mishra said. In the second incident, at least 8 people died and 15 others injured when a jeep they were travelling in fell into a deep gorge in Madhya Pradesh’s Barwani district, close to the Maharashtra border. Police said, “Some people of Barwani district were returning from Maharashtra’s Toranmal on Sunday night, when their jeep went out of control and fell into a deep gorge. So far the death toll has gone up to 8. Most people who died are residents of Pati police station area of Barwani district who had gone to pay obeisance at Shiv Mandir. The operation is on to search survivors at the accident site.”

Hyderabad: Telangana Pradesh Congress Committee (TPCC) chief A Revanth Reddy was placed under house arrest by the police in Hyderabad on Monday to prevent him from visiting the government lands at Kokapet which were auctioned last week. Policemen were deployed at Revanth Reddy's house in Banjara Hills early morning to stop him from leaving for Kokapet area. The opposition party alleged its several other leaders were either placed under house arrest or were arrested while heading for Kokapet. Alleging corruption in auction of Kokapet lands, Revanth Reddy had called for protest at Kokapet.

Patna: Former Health Minister Tej Pratap Yadav was admitted to a hospital in Patna on Monday after complaining of abdominal pain and uneasiness in breathing. This was the second time in a month when Tej Pratap fell ill. He is currently undergoing treatment in a prominent hospital in Patna. A source said Tej Pratap complained of abdominal pain and breathing problems on Monday afternoon. Initially, he underwent treatment at his official residence but as his condition did not improve, doctors advised him for treatment in hospital.

Kanpur (UP): A video of a boy, who was stripped with his hands tied behind and thrashed for allegedly stealing vegetables, went viral prompting the police to lodge an FIR against a dozen people here in Sachendi area of Kanpur, UP, police said on Monday. Two persons whose identities were established with the help of the video were detained on Sunday for their alleged roles, said SP (Kanpur Outer) Ashtbhuja P Singh. Interrogation is being done to ascertain their roles, Singh said, adding the detained persons would be sent to jail if their roles were established in the crime. 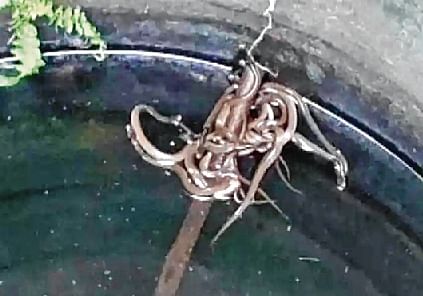 Ganjam (Odisha): As many as 15 baby Cobra snakes were rescued from a well by a snake helpline in Ganjam district on Sunday. The snakes were later released into the reserved forest. “I got a call from Brahmapur saying a woman saw some snakes in a well. We rescued 15 baby Cobra snakes and released them safely in reserved forest,” said Swadesh Kumar Sahu, Snake Help Line. This comes over a month after an 8-ft-long king Cobra was rescued by a woman in Mayurbhanj.

‘Interests of OFB staff will be safeguarded’

New Delhi: The government on Monday said steps have been ta­ken to safeguard the interests of employees of the Ordnance Factory Board (OFB) after it is split into 7 state-owned corporate entities. In a major reform initiative, the government last month approved a long-pending proposal to restructure the OFB which operates 41 ammu­ni­tion and military equipment production facilities across the country to improve its accountability, efficiency and competitiveness.