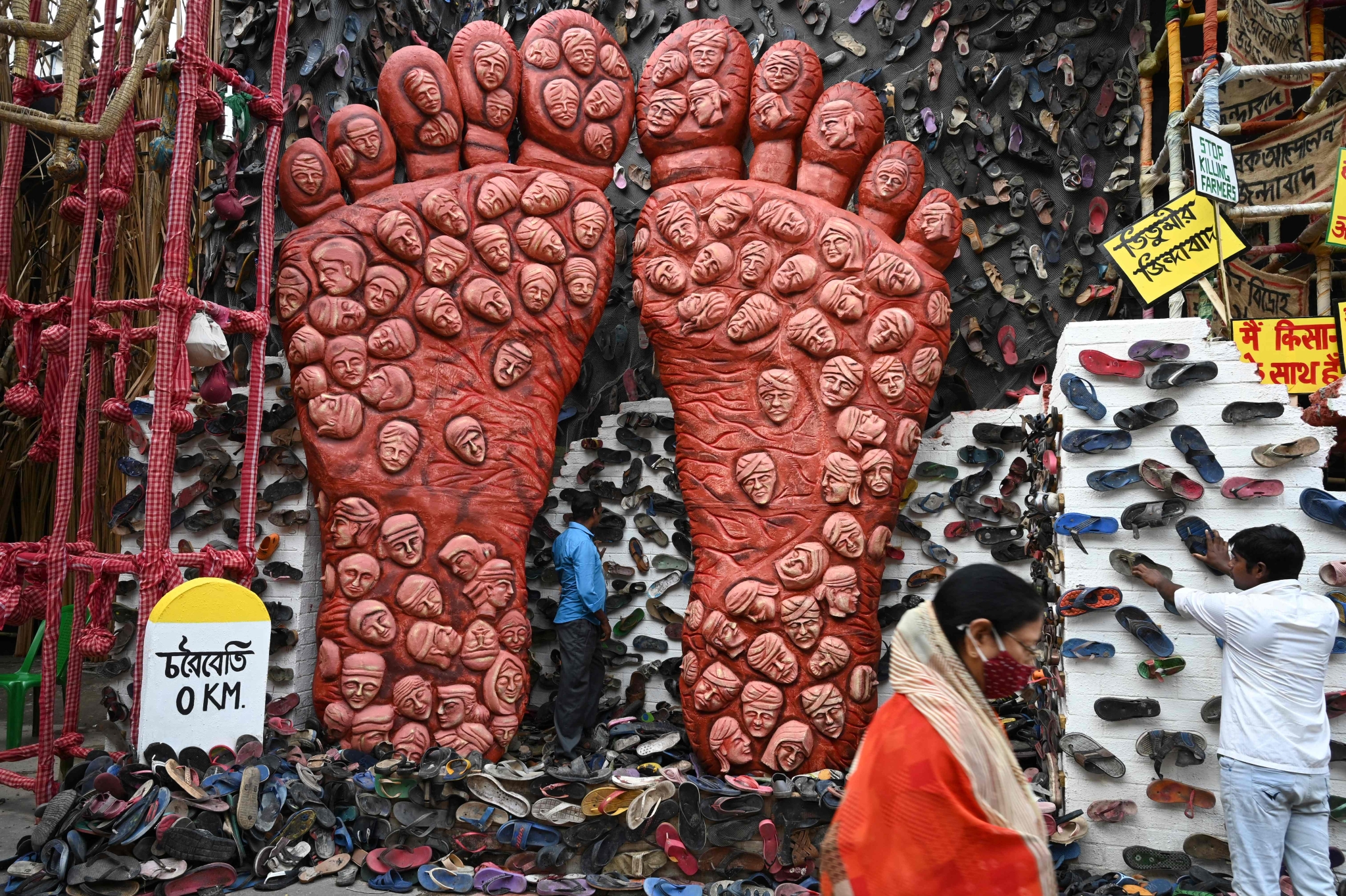 TOPSHOT - A person walk past workers decorating of a makeshift place of worship for Durga Puja with a theme in support the ongoing farmers protest against the central governments agricultural reforms, in Kolkata on October 6, 2021. | (Photo by DIBYANGSHU SARKAR / AFP)

Kolkata: After the BJP sent a legal notice to the Dum Dum Park Puja committee in Kolkata, an FIR was lodged at Lalbazar against the puja committee.

Advocate Shantanu Singha in a letter to the Commissioner of police cited IPC sections 295, 1208 and 506.

“I am a staunch Hindu and believe in God and Goddesses. Unlike Muslims, Christians and/or atheists the idol of Goddess Durga is not just a mere idol but a living mother with all her Godly and heavenly powers. So where this Goddess Durga is worshiped even for four seconds that pandal becomes Mandir for Hindus like me. The culprits of Dum Dum Bharat Chakra Club should be booked,” read part of the letter.

It is pertinent to mention that the Dum Dum park puja organizer had placed heaps of paddys along with slogans in favour of farmers and poor and several burnt shoes and slippers are heaped as a part of pandal decorations to highlight the Lakhimpur Kheri incident.

“A Durga Puja pandal in Dumdum Park has been decorated with shoes.This heinous act of insulting Maa Durga in the name of "Artistic liberty" won't be tolerated. I urge the Chief & Home Secretary @egiye_bangla to intervene & compel the organizers to remove the shoes before Shashti,” read the tweet.

However, Puja committee president Pratik Chowdhury said that they will stick with their theme.

Meanwhile, VHP has also sent a legal notice to the same puja committee.

Talking to Free Press Journal, Vishva Hindu Parishad (VHP)’s South Bengal spokesperson Sourish Mukherjee said that the VHP had planned to protest in front of the puja pandal during the festival.

“Keeping slippers in pandal is against the Hindu sentiments and culture. We will protest in front of the pandal to inform the puja revelers that the organizers had hurt the sentiments of Hindus and Goddess Durga,” mentioned Sourish.