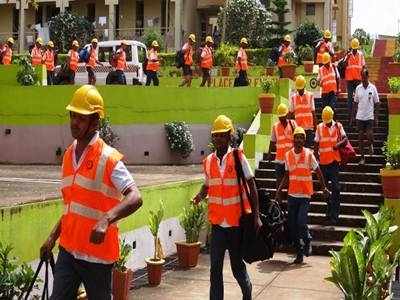 Bhubaneswar:  As cyclone Hudhud weakened and moved to Chhattisgarh, Odisha Government today braced for relief and rehabilitation in the affected southern districts  where its damaged houses and uprooted trees even as heavy rainfall was expected to lash these areas.

While three persons died in Odisha due to the very severe cyclonic storm that made a landfall near Visakhapatnam in neighbouring Andhra Pradesh, damage caused by the calamity would be assessed soon, Special Relief Commissioner (SRC) P K Mohapatra said.

As a precautionary measure, around 2.33 lakh people had been evacuated from vulnerable areas to safe places in ten districts in view of Hudhud though the intensity of the cyclone was not very fierce, he said.

Stating that uprooting of trees and damage to thatched houses were reported from some of the southern districts, the SRC said immediate step had been taken for clearance of roads blocked due to uprooted trees and other objects.

As the cyclonic storm moved away from the state and proceeded north-westwards continuing to lose steam gradually, rain and thundershower was expected at most places over Odisha till tomorrow, IMD centre here said.

The deceased were identified as Puja Mallick (6) and Hemant Mallick (11) of Magarkanda village in Kendrapara district and 42-year-old fisherman Sudulu Goraya of Penthakata in Puri district, Mohapatra said.

Mohapatra said that there has not been much damage so far in the storm but scores of trees and electricity poles had been knocked over in Potangi area of Koraput district as the system passed through the region after making landfall near Visakhapatnam.

The SRC said the state government had to make special efforts to get the tribal people, mostly from the Bonda and Didia communities in Malkangiri, to leave their dwellings and move to safety.

As most of the southern region received heavy to medium rainfall, the state government had made preparations for any possible floods in rivers like Bansadhara and Rusikulya. However, the water level in the two rivers was below danger levels, officials said.

NDRF and ODRAF teams were now gearing up for post-cyclone operations in order to restore normalcy in the cyclone affected areas, official sources said.

Steps have been initiated to restore power supply in some areas in south Odisha wehre electric poles and other systems had been affected, the sources said.

Armed with equipment and machinery, the teams would soon remove uprooted trees, they said.

Free kitchens had been set up in around 2000 shelter homes where the evacuated people were accommodated in the ten districts of Gajapati, Ganjam, Koraput, Malkangiri, Puri, Rayagada, Nabarangpur, Kendrapara, Kalahandi and Khurda, a senior official said.

Those sheltered in these centres would be able to leave for their homes as soon as the rainfall and situation improves and wind speed falls, he said.

Road and train operations to Vishakhapatanam were suspended during the cyclonic movement yesterday as a precautionary measure in view of the storm. While the state government stopped plying of buses to Andhra Pradesh and many southern Odisha districts, railways cancelled 58 trains and diverted 50 others.

While bus services were resuming to some places today, the railway was also planning to run trains up to Palasa, the sources said.