Many parts of the state in Chennai have received heavy rains over the past few days.
Dravida Thambi 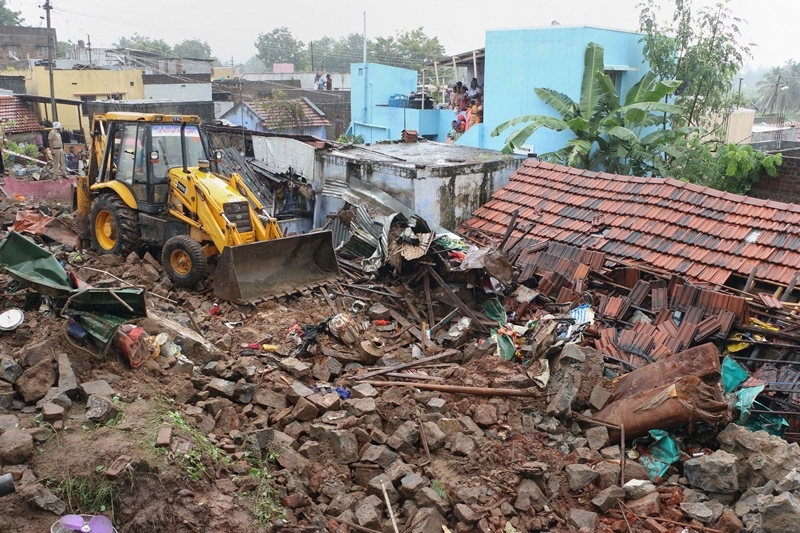 Chennai: As many as 17 persons including two children died as three houses collapsed after a large compound came crashing in Mettupalayam, about 50 kms away from Coimbatore in western Tamil Nadu on Sunday night.

Many parts of the state in Chennai have received heavy rains over the past few days. Chief Minister Edappadi K Palaniswami announced a solatium of Rs 4 lakh to the kin of the deceased.

Fire and Rescue Services Department personnel used bull dozers to clear the debris and recover the bodies of the victims, most of whom were asleep when the tragedy occurred.

Following the incident, the Coimbatore District administration urged the Tamil Nadu Disaster Relief Force at Coonoor in nearby Nilgiris to remain on alert.

Coimbatore Collector inspected the spot of the tragedy and said an investigation would be carried out by the police into the incident.

Meanwhile, relatives of the victims and local people staged a protest in front of Government Hospital, where post-mortems were being done, seeking enhancement in compensation to Rs 20 lakhs.

As many as 25 people have died in various rain-related incidents in Tamil Nadu since November 29, the state government said on Monday. This includes 17 who died after a wall collapsed on three houses at Nadur village in Mettupalayam near Coimbatore.

As the North-East monsoon intensifies in the state, nearly 1,000 people have been accommodated in relief camps in Tuticorin, Cuddalore and Tirunelveli districts which bore the brunt of rain fury.

Chief Minister K Palaniswami chaired a review meeting with his deputy O Panneerselvam and other cabinet colleagues and senior officials to take stock of the situation. He issued orders to monitor the reservoirs, many of which are either full or fast filling up.

As many as 58 head of cattle perished while over 1,700 thatched and tiled roof houses suffered damage. Palaniswami asked officials to ensure preparedness by holding adequate stocks of medicines, food, diesel generators and disinfectants.

Rescue teams should be on standby with necessary equipment to rush to affected areas while designated officials should monitor the precautionary measures, it said quoting the chief minister.

The incessant rains in Chennai over the weekend brought cheer to the city's water managers, as the storage in the four reservoirs went up. The combined storage in the four reservoirs - Poondi, Cholavaram, Redhills and Chembrambakkam - stood at 4,091 million cubic feet (mcft), double the level it was on the same day in 2018, which was 1,694 mcft. The overall combined capacity is 11,257 mcft.