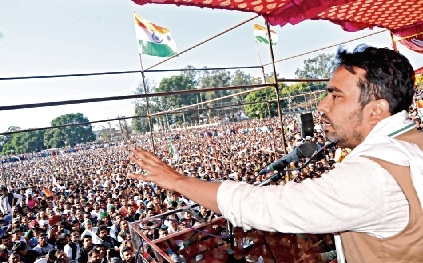 RLD leader Jayant Choudhary speaks at the Kisan Mahapanchayat in Shamli, UP on Friday. | —ANI

Thousands of farmers turned up for a meeting in Shamli district in western Uttar Pradesh on Friday amid a growing clamour against the Centre's agri-marketing laws in the region.

People from Shamli and nearby districts started reaching Shamli's Bhainswal village on tractors, two- and four-wheelers and on foot for a 'kisan panchayat' being held there by the Rashtriya Lok Dal (RLD).

The people gathered there despite the Shamli administration denying permission for the meeting and imposing prohibitory orders under section 144 of the CrPC.

This is the fourth major farmers' meeting in western Uttar Pradesh after Muzaffarnagar, Mathura and Baghpat, besides some in Haryana, to support the ongoing stir against the farm laws.

Scores of regional 'khap' leaders, Bharatiya Kisan Union members and RLD vice president Jayant Chaudhary, among others, attended the event, even as security personnel were deployed in large number in the area.

RLD leader Chaudhary had on Thursday tweeted that there are "144 reasons why I will go to Shamli tomorrow", attaching to it a news article on the denial of permission for the event by the Shamli district administration.

The RLD has already extended support to the ongoing peasants' demonstrations at Delhi's borders and in parts of Uttar Pradesh, Punjab, Haryana and Rajasthan.

The party's farmer outreach programmes which began Friday in Shamli are further scheduled to be held in Amroha, Aligarh, Bulandshahr, Mathura, Agra, Hathras, Pilibhit in Uttar Pradesh and a couple of them in Rajasthan during the February month.

In a move that could have far-reaching consequences on the politics in UP, a panchayat in Agra has asked the 9 MLAs and 2 MPs of the district to either issue a letter of support to the protesting farmers or face "social boycott". This comes a week after the khap panchayats in Muzaffarnagar called for a social boycott of those who do not support the farmers’ agitation. “We will stage protests at residences of MLAs and 2 MPs in the districts. We will ask them to provide a letter supporting the peaceful protest of farmers or they will have to face social boycott,” he said.

A BJP MLA from Muzaffarnagar, requesting anonymity, said "We are caught in a Catch 22 situation. If we do not support the farmers, we cannot win the elections in 2022. However, we cannot defy the partyline. Our leadership should try to resolve the matter at the earliest because both sides seem to be hardening their stand."

"These are not the nails being put on the roads going to Delhi, these are the nails put into the political coffin that is being made for the BJP. This is a very hurtful image that has gone out. These are the people who freed Delhi from the British, who fought against the Mughals, whenever there was a crisis in Delhi, it was the farmers close to Delhi in Punjab, Haryana, UP that were first there. Today, the Kisan Ghat (memorial of former PM Charan Singh), Parliament and Rajghat are in Delhi, and you are forbidding these farmers from even entering Delhi," said Jayant Chaudhary, Rashtriya Lok Dal vice president.

FIR against kin for insulting Triclolour

The mother and brother of a farmer, killed in a Ghazipur road mishap, were booked alo­ng another person for allegedly insulting the national flag after a video of his last rites in Pilibhit showed the body draped in the Trico­l­our, police said. Draping the Tricolour in a civilian funeral is an offence. 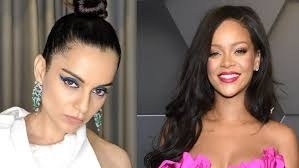 Following reports claiming pop star Rihanna was paid $2.5 million to tweet in favour of the farmers’ protest, actor Kangana Ranaut on Friday expressed her shock, and took a dig at the pop singer quoting the amount as “So Little”.

Media reports quoted ‘The Print’ and said Poetic Justice Foundation (PJF), an organization in Canada, played a “vital role” in “starting a global campaign”. Sources said the campaign had the backing of “political leaders and activists based out of Canada”.

The report added the sources believe Skyrocket, a PR firm where pro-Khalistan activist Mo Dhaliwal is a director, paid $2.5 million (aro­und Rs18 crore) to pop star Rihan­na to tweet in favour of the farm­ers’ protests. Kangana expre­ssed shock at the figure and slam­m­ed Rihanna by saying, “So little!!?”

The actor’s tweet added she gives her “friends gifts of the sa­me amount” and called these Int­ern­a­tional celebs “biggest fraud” for commenting on farm­ers’ pro­test. “I don’t mean to brag, I don’t do fairness creams, item numbers, shows, big hero films and now all brands cancelled my contracts al­so, still whatever little I earn most of it I give away and in ret­urn gain so much more, not ab­le to express how to encourage peo­ple to give, that’s all,” tweeted Kangana.

BKU keeps UP, Uttarakhand out of Chakka Jam

Lucknow: In a surprise move, Bharatiya Kisan Union leader Rakesh Tikait, who is holding a dharna at Ghazipur border along with his supporters, announced to keep BJP-ruled Uttar Pradesh and Uttarakhand out of proposed nationwide ‘Chakka Jam’ on Saturday. A decision to this effect was taken after he held a meeting with Balbir Singh Rajewal, chief of BKU (Rajewal) and his supporters at Ghazipur border where he is staging a dharna. “We have decided there will be no road blockade in Uttar Pradesh and Uttarkhand during Chakka Jam tomorrow (Saturday). Farmers will, however, block national and state highways in rest of the country excluding Delhi to intensify their agitation in support of their demand to repeal the farm laws.”

Tikait clarified, “it was being done to keep farmers of UP and Utta­ra­k­hand in standby so that they are called to Delhi immediately in case of government crackdown, mass arrest of farmers or any other emergency situation.” After violence on the R-Day during the tractor rally, agitating farmers are treading cautiously. Tikait has appealed to farmers not to take law into hands during Chakka Jam and be aware of rowdy elem­e­nts who might try to create trouble to defame farmers’ peaceful stir.

“Those who fixed nails for us, we will welcome them with flowers.” In a unique gesture, agitating farmers at Ghazipur border levelled the ground with two tractor trollies of soil at the site where the Delhi Police had laid a row of nails to grow flowers for them. The farmers brought two tractor trollies of soil on Friday and dumped it at the site where the Delhi Police had spiked nails to create a barrier for agitating farmers not to enter the national capital again. Bharatiya Kisan Union (BKU) leader Rakesh Tikait took a spade to level soil dumped there. Many agitating farmers could not understand what was going on and why their leader was making a soil bed there. “We will plant seedlings to offer flowers to men in Khaki when they use force against us,” Tikait told supporters. “We will continue our agitation peacefully. Greeting them with flowers is our answer to their wall of nails,” he said. —Srawan Shukla

Patna: RJD leader Shivanand Tiwari on Friday alleged the Centre "fielded" Sachin Tendulkar to "counter" international celebs, and said it was an insult to the nation. The RJD national vice-president asked if the govt wants the world to turn a blind eye to the farmers’ stir by "getting statements issued by people like Tendulkar".

Meanwhile, offended by Tendulkar’s tweet, scores of Keralites flooded tennis star Maria Sharpova's social media pages with messages, apologising for trolling her in 2015 after she had in an interview pleaded ignorance about the cricket icon. “Sharapova, you were right about Sachin, that he is not a person of quality that you should know,” a social media user commented in Malayalam, as was hundreds of other messages in the south Indian language.