Emerging contours of electoral tussle in UP 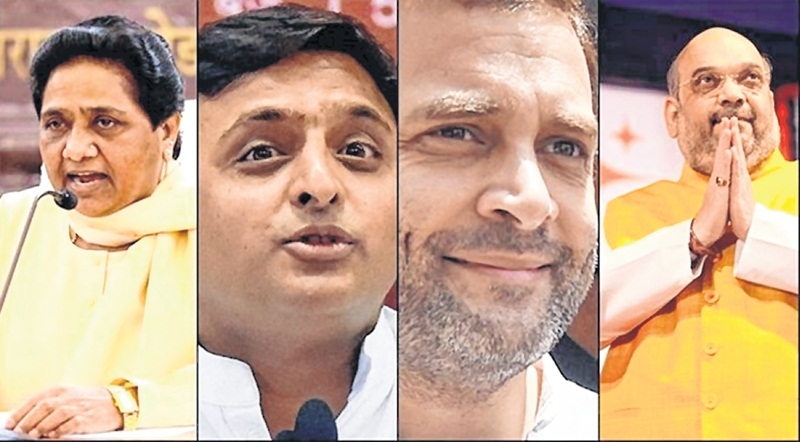 New Delhi: The battle lines for the general election in Uttar Pradesh are now clearly being drawn. A triangular contest between the rightwing BJP, the centrist Congress and the socialist Samajwadi Party and its ally Bahujan Samaj Party looks inevitable in most constituencies, as efforts to include Congress in the SP-BSP alliance have finally come to a naught.

Lack of understanding among the three parties opposed to the BJP will not only affect their fortunes in UP alone, but the mutual rivalry among the three may well cast its shadow on the outcome of polls in the rest of the Hindi heartland.

In fact, the roots of the discord among them go back to the Congress decision to keep the MLAs of both the SP and the BSP out of the government formed by the Congress in Madhya Pradesh and Rajasthan after winning the polls in December last year despite the two mainly UP-based parties offering their support to Congress the two CMs.

The SP leader and former UP Chief Minister Akhilesh Yadav had expressed his displeasure publicly is known to one and all. When the LS poll is round the corner Akhilesh and Mayawati offered not to field any candidate from their parties in Amethi and Rae Bareli, the constituencies from where Rahul and Sonia Gandhi contest. On the contrary, Rashtriya Lok Dal (RLD), led by Chaudhry Ajit Singh was offered three seats.

First the SP and the BSP felt to be slighted by the Congress due to what happened in MP and Rajasthan, and subsequently, the Congress found the two UP-based parties to be cold towards it.

Then, the Congress decided to go it alone in UP and declared party candidates for one-third, or 27 of the total 80 seats, that UP has. The Congress, obviously, did not want to share seats with the SP and the BSP in states other than UP.

Yet, in case of Maharashtra, the Congress at one stage showed willingness to offer a few seats to the BSP and SP alliance to reach some understanding in turn in UP with the alliance. But this was after Congress’ talks for the seat-sharing with Prakash Ambedkar’s Bharipa Bahujan Mahasangh in Maharashtra did not succeed. So, the ice in UP could not be broken by the Congress, and it had no option but to go solo in the general election.

To ensure it puts up a brave fight, the Congress has offered tickets to some of the former leaders of its rivals who opted to add to the Congress ranks recently. These are Savitribai Phule, Rakesh Sachan and Kaisar Jahan. And it is through them that the Congress is trying to send a message across it was trying to be socially savvy among Dalits, backward castes and the Muslim voters.

These sections of the electorate form the backbone of the SP-BSP alliance’s support in UP. Thus, it remains to be seen how the Congress catches the imagination of these numerically significant segments of society. In this process, the Congress is bound to affect the fortunes of both the SP and the BSP through the polls in the next two months.

The two regional parties emergence as UP’s quite consequential political forces is, in fact, the result of erosion of Congress’ support-base in the state. In the past, this support-base was made of upper caste, Muslims and Dalits who generally voted for the Congress.

Caste rivalries resulted in debasement of Congress’ influence in the state. Thus, the party is again eying Dalit and Muslim voters who have often been propelling SP and BSP legislators alongside backwards to power. This was so for about two-and-half decades and until these parties were upstaged by the BJP in the last Lok Sabha polls.

It became all the more grim for the SP and the BSP after last year’s Assembly polls in UP when the two parties like the Congress lost their ground. To again stand up and be able to set out on the road to power and effectiveness, BJP’s rivals once again depend on voters’ wisdom.

Electorate averse to give BJP another chance will certainly look for winning potential from the candidates fielded by the SP-BSP alliance on the one hand and the Congress on the other before deciding on whom to vote to power. Thus, the Congress can stand a good chance in the greatly jumbled up UP politics based on the candidates it fields and the way they are backed by campaigners like Rahul and Priyanka in the days to come.