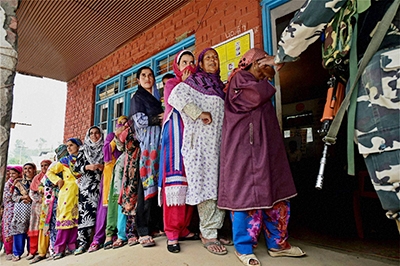 Anantnag : A CRPF jawan guards as voters wait to cast votes at a polling station during by-election to Anantnag constituency in south Kashmir on Wednesday. PTI Photo by S Irfan (PTI6_22_2016_000082B) |

Srinagar : Ignoring boycott calls from separatists and militant groups, nearly 34 per cent electorate exercised their franchise in the by-poll in Anantnag Assembly constituency on Wednesday where Chief Minister Mehbooba Mufti and seven other candidates are in the fray.

The voter turnout was five per cent less than the last Assembly elections. The polling, which began early this morning on a dull note apparently due to the ongoing holy fasting month of Ramadan, picked up pace as the day progressed with the final poll percentage standing at 34 per cent.

The by-poll in the constituency was necessitated by the demise of former Chief Minister Mufti Mohammad Sayeed on January 7 this year. The polling ended peacefully, Chief Electoral officer (CEO) Shantmau said. Out of total 84067 electors, including 4229 migrants voters, a total of 28446 cast their votes during the polling period which started at 7 am and concluded at 6 pm, he said.

He said out of 42840 male voters and 41227 female voters, 15384 male, 13062 female and 638 migrant voters exercised their franchise. Shantmanu said 13 polling booths were also set up at Jammu for migrant voters, one each at Udhampur and Delhi, adding that three additional Observers were also deployed for these three locations.

The Chief Electoral Officer said the Election Commission of India had deployed four observers including two General Observers, one Expenditure Observer and one Police and Security Observer for monitoring.       He said 118 EVMs were used for the polling on 117 polling booths, saying that one EVM was replaced at Gangyal Jammu before start of poll as it developed technical snag.            As many as 582 personnel were detailed for election duty, he said.

Twenty polling stations were set up as model polling stations equipped with necessary facilities, he said adding 77 Micro Observers were deployed on the booths to ensure free and fair polls.

He said that webcasting facility at 20 polling booths and videography at five polling booths was also available to cover the poll process. Postal ballots were also dispatched to migrants, service voters and detainees and under trials at different places.