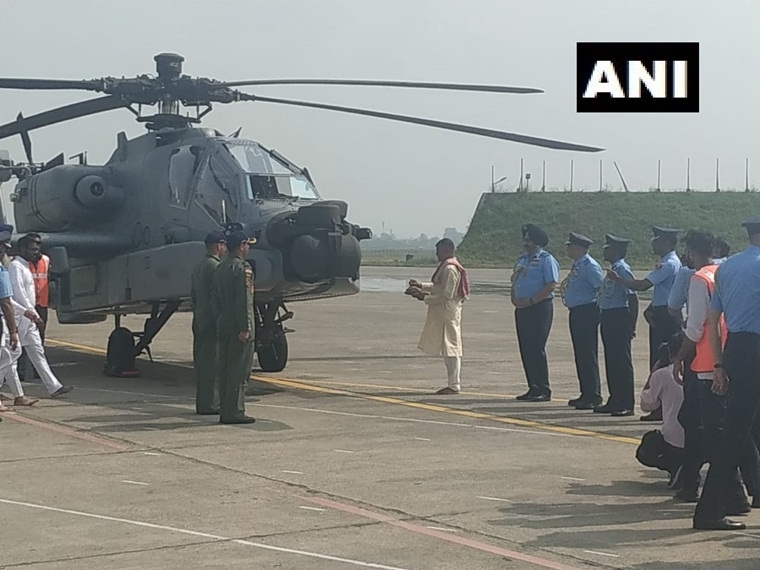 Pathankot (Punjab): In a major boost to the Indian Air Force, eight Boeing AH- 64E Apache Guardian Attack Helicopters were inducted into the force on Tuesday.

IAF chief Air Chief Marshal BS Dhanoa inducted the choppers officially into the service after a ceremony held at the Pathankot Air Force Station. Eight helicopters have been inducted into the air force in the first batch out of the 22 procured from the US. In September 2015, IAF had signed a contract with US Government and Boeing for these Apache helicopters.

The delivery of the whole lot is expected to be completed by 2020, as stated in the contract. The helicopters have been customized to suit the force's future requirements and would have significant capability in mountainous terrain with the capability to carry out precision attacks at standoff ranges and operate in hostile airspace with threats from the ground.

The aircraft can transmit and receive battlefield pictures to and from the weapon systems through data networking making it a lethal acquisition. These helicopters will provide a significant edge in any future joint operations in support of land forces. The Apaches are equipped with hellfire missiles and rockets, with one helicopter having the capacity to carry 8 such missiles. It also has a canon gun with 1200 rounds of firing capacity at a time along with which two missile pods carrying 19 missiles each can be fixed. The attack helicopter can also be used for reconnaissance.

The US has delivered around 2200 Apache helicopters to various countries of the world. India is its 16th customer, Boeing said. Importantly, some of the major components of these machines have been made in India.