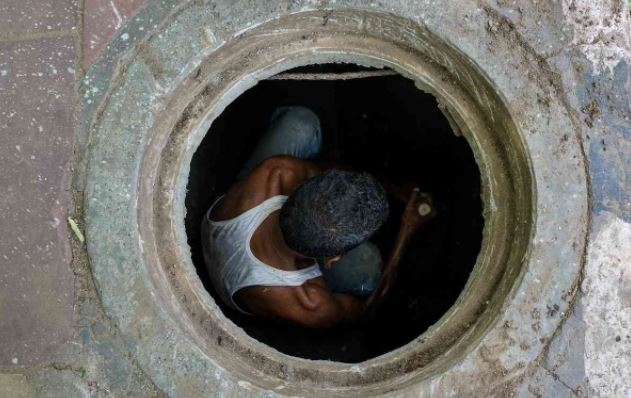 A man cleaning a sewer in Delhi | File Photo (AFP)

Two men have died after they inhaled toxic gases while cleaning a septic tank in northwest Delhi's Azadpur area, police said on Monday.

At 6.45 pm on Sunday, police received information that in a gold factory in Azadpur's G-Block, three men fell unconscious while cleaning a septic tank.

According to fire officials, they received information about the incident at 6.54 pm and sent four fire tenders to the spot to rescue the men.

The company that owns the factory located in the GT Karnal Road Industrial Area, Bada Bagh manufactures gold and silver chains, the police said, adding that it stores chemicals used in making ornaments and the water used for washing in a septic tank.

The tender for cleaning the tank was given by factory owner Rajender Soni to contractor Pramod Dangi (35), a resident of Najafgarh, a senior police officer said.

"Three of the seven men cleaning the tank fell unconscious. They were taken to the BJRM Hospital. On reaching the hospital, two of them -- Idris (45) and Salim (45) -- both residents of Khurja in Uttar Pradesh, were declared dead," Deputy Commissioner of Police (northwest) Vijayanta Arya said.

Abdul Saddam (35), Salim (35) and Mansoor (38) were treated and discharged from the hospital. Islam (40) is still undergoing treatment at the hospital and is reportedly stable, the police said.

A case under relevant provisions of law has been registered and the factory owner and the contractor have been arrested. The labourers were not wearing any safety gear and were engaged to clean the septic tank for Rs 400 each, the DCP said.