Lok Sabha member for Karur constituency in Tamil Nadu Jothimani took to Twitter on Tuesday night, alleging that the Delhi Police had assaulted her and torn her clothes while manhandling her

On Wednesday, as Indian National Congress (INC) chief Rahul Gandhi was being questioned by the Enforcment Directorate for the third consecutive day, the Delhi Police stormed the AICC headquarters on Akbar Road, and took several Congress MPs into custody.

Lok Sabha member for Karur constituency in Tamil Nadu Jothimani took to Twitter on Tuesday night, alleging that the Delhi Police had assaulted her and torn her clothes while manhandling her.

Fellow Congress MP from Kerala Shashi Tharoor took to Twitter to express his outrage at the incident.

"This is outrageous in any democracy. To deal with a woman protestor like this violates every Indian standard of decency, but to do it to a LokSabha MP is a new low. I condemn the conduct of the @DelhiPolice and demand accountability. speaker @ombirlakota please act!," Tharoor wrote.

In the video shared by Tharoor, Jothimani alleged that the Delhi police personnel tore her clothes and carried her like a criminal in a bus along with other women protesters.

Jothimani then gets up and turns around to show her torn kurta. The Congress MP is seen wearing only one shoe in the video.

"The Delhi police brutally assaulted us yesterday. They tore my clothes, removed my shoes and carried me like a criminal," she said.

Congress leaders like MP Jothimani have been protesting on the streets against the ED summons to Rahul Gandhi in the National Herald money laundering case.

On day 3 of questioning, protesters burned tyres in front of the ED office in Delhi. Several leaders were detained, including Sachin Pilot.

Earlier in the day, the Congress accused Delhi Police of acting like the BJP's "private militia" by storming into the party headquarters and beating up workers outside it. Several Congress leaders and workers outside the AICC office were rounded up by the police and bundled into buses.

Top party leaders including KC Venugopal, Bhupesh Baghel and Randeep Surjewala, on Tuesday said that the police also barged into the party headquarters from where they detained workers and leaders.

The Delhi police, however, have denied the Congress claims. 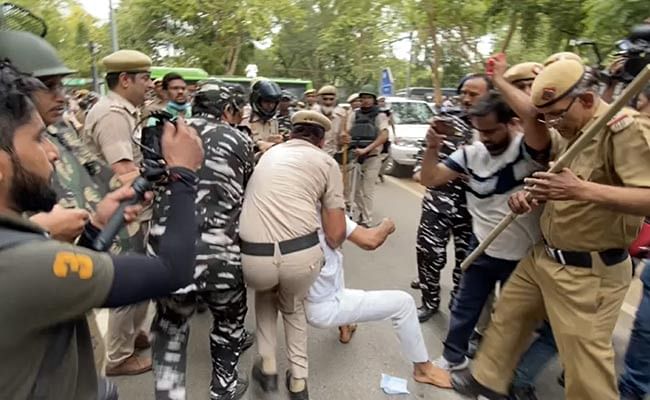