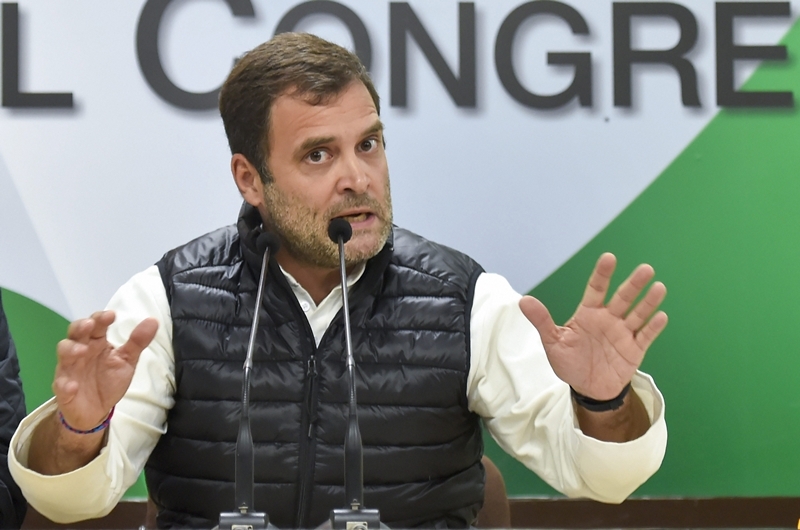 New Delhi: Congress President Rahul Gandhi on Friday released a document showing the defence ministry objecting to ‘the PM himself carrying out a parallel negotiation’ with France on the Rafale fighter aircraft. The letter by the defence secretary clearly says the parallel discussion by the PMO has weakened the ministry’s case and suggests revised modalities be adopted to let the PMO directly negotiate, he said at a special press conference at the AICC headquarters here.

The issue rocked the Lok Sabha as the Congress members tried to raise it disrupting the question hour and Speaker Sumitra Mahajan adjourned the House till noon. Asserting that “for more than a year, we have been saying that PM is directly involved in Rafale scam, Rahul said the defence secretary’s letter of 24.11.2015 amounts to the defence ministry saying Modi is ‘chor’ (thief). In a tweet on #PakdaGayaModi, he said layers of the #Rafale scam tumble out, nailing PM Modi directly.

His media chief Randeep Singh Surjewala tweeted: “Why was Modi ji conducting parallel negotiations with French? Why was bank guarantee/sovereign guarantee given a go by? Why were India’s interests compromised?” Rahul said the defence secretary has clearly said that the PM bypassed the negotiations and objected to his interference, parallel negotiations for the sake of Anil Ambani.

In reply to a question on the Supreme Court’ clean chit to the Rafale deal, he shot back that the entire judgment is a suspect since the government lied to the court and withheld information, claiming the price has been already disclosed to the Comptroller and Auditor General (CAG). He said the defence secretary is quite clear that it is desirable that the PMO avoid the parallel discussions bypassing the defence ministry as it affects its negotiations.

Ridiculing Modi for accusing the Congress of vested interest to force cancellation of the Rafale deal in his lengthy reply to the Lok Sabha on Thursday on the President’s address, Rahul said the PM did not speak on this objection to the parallel negotiations.

In reply to a question, Rahul clarified that he did not discuss Rafale with Goa Chief Minister Manohar Parrikar, who was then the defence minister, when he met him in Panjim since he is not well, limiting discussions personal to enquire about his health and his family. That, however, does not mean he won’t continue to speak on the scam in the Rafale deal, he said.