Cow, not tiger, to be National Animal now? As Allahabad HC judge backs idea, here's all you need to know 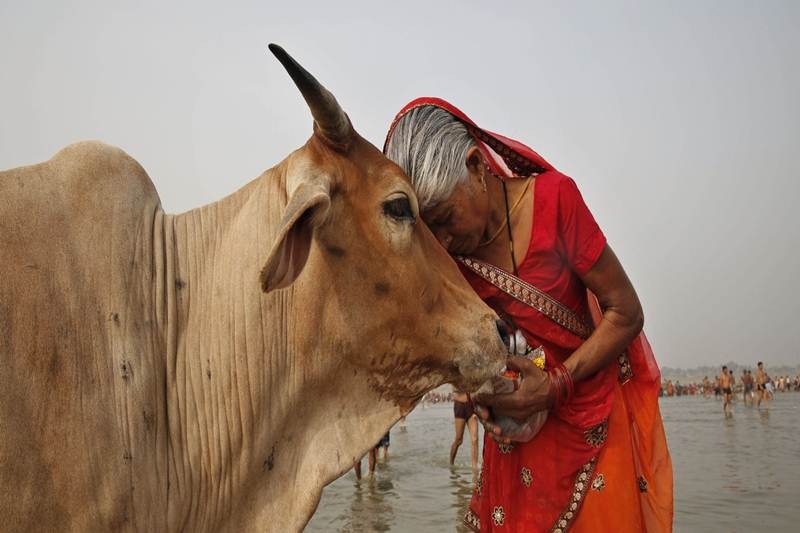 A woman worships a cow as Indian Hindus offer prayers to the River Ganges, holy to them during the Ganga Dussehra festival in Allahabad, India, Sunday, June 8, 2014. | Photo: AP

India's reverence for cows has long been established with millions considering it a sacred symbol. In many cases, this has manifested in somewhat unusual ways - from the introduction of a National Cow Science Exam to expounding on the scientific links between cow slaughter and earthquakes and the conviction that Indian cow milk contains gold. But the possibility of the bovine replacing the tiger as the National Animal of India is somewhat new.

Earlier this week, Justice Shekhar Kumar Yadav of the Allahabad High Court had urged the Centre to declare cow as the National Animal as well as introducing a bill in Parliament to ensure the "protection of cows". According to reports, he also wanted the latter to be declared a "fundamental right of Hindus". The observations were a part of the 12-page judgement put out by the court while denying bail to an individual accused of cow slaughter.

"Give cow fundamental rights, declare it national animal. We know that when a country's culture and its faith gets hurt, the country becomes weak," noted the Court. The Allahabad HC also said that the government should bring laws against those who are running cow shelters because their aim is only to earn money in the name of the animal's protection.

The remarks have prompted quit the debate with many organisations and leaders throwing their weight behind the suggestions. "I welcome Allahabad High Court's decision to declare cow as national animal. Cow is respected by all religions, with religious institutions banning its killing, consumption and selling. Lynching of cows is a crime against humanity," declared RSS leader Indresh Kumar.

"I urge the central government to frame a law, present it in the Parliament and pass it so that when cows become a national animal people will respect them more," said Akhil Bharatiya Akhara Parishad (ABAP) President Mahant Narendra Giri on Thursday.

Calling the cow a symbol of Indian culture and devotion, Punjab Gau Sewa Commission Chairman Sachin Sharma also backed the suggestion, even as he hit out at the Centre citing inaction. "The Chairman alleged that the Central government had, in fact, completely forgotten the importance of the cows and no Bharatiya Janata Party (BJP) activist has done anything meaningful for the welfare of cows," read a statement from its Information and Public Relations Department.

Well known Sunni cleric and All India Muslim Personal Law Board member Maulana Khalid Rashid Farangi Mahali also lent strong support to the suggestion. The Maulana said that Muslims whole-heartedly support the court's suggestion and respect sentiments of the Hindu brothers. He said that this would foster unity and peace in the country.