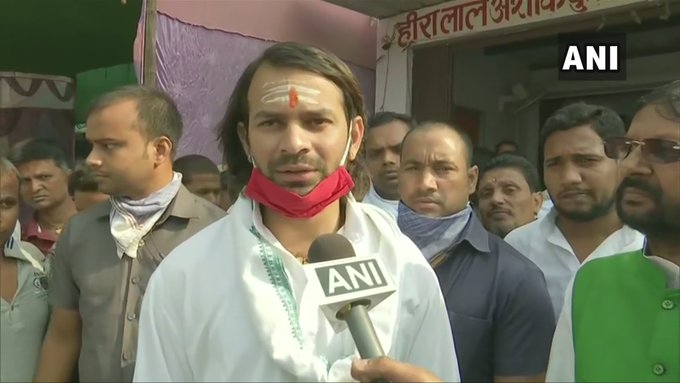 Samastipur (Bihar): A FIR has been registered against Rashtriya Janata Dal (RJD) leader Tej Pratap Yadav over allegedly hiding details of property in the affidavit filed during the Assembly elections in Bihar in 2020, the police said on Thursday.

The FIR has been registered in Samastipur's Rosera police station. The RJD leader has been charged under Section 125 (a) of the Representation of the People Act, 1951 for hiding immovable property.

Janata Dal(United) had lodged a complaint regarding this matter with the Chief Electoral Officer.

On the orders of the Election Commission and the instructions of the District Election Officer and Deputy Collector Land Reforms (DCLR), the Rosera Sub Divisional Officer (SDO) Brajesh Kumar has taken action against the RJD leader.

Afterwards, a copy of the complaint was sent to the Election Commission of India, who wrote to the Central Board of Direct Taxes (CBDT) for investigation.

After CBDT's investigation, a show-cause notice was sent to Tej Pratap Yadav by the Election Commission for giving wrong information in the affidavit. Tej Pratap was asked to reply within three weeks' time. However, after the RJD MLA failed to respond in the given time, an FIR was registered against him.