In Silchar, many parts of the Cachar Cancer Hospital and Research Centre are completely submerged because of the floods.

Amid the chaos due to floods in Assam, in which 126 people have been killed so far while over 22 lakh remain affected across the state, the state hospitals are giving chemotherapy to patients on the road as the cancer hospitals are waterlogged in one of the worst floods ever in years.

In Silchar, many parts of the Cachar Cancer Hospital and Research Centre are completely submerged because of the floods.

According to a Reuters report, the 150-bed Cachar Cancer Hospital and Research Centre have been inundated for days, and the situation has become so dire that its administrators have requested life jackets and an inflatable raft to transport patients and staff, along with other essential items needed to keep the facility running.

The hospital is located in the Barak valley in Assam where there is a heavy flood situation.

"Procedures that can be done outside, like chemotherapy and initial diagnosis, we are doing on the road where there is minimal water-logging," Reuters quoted Dharshana R, who heads the resource-mobilisation department of the hospital as saying.

"If anybody requires emergency surgery we are conducting them, but we have reduced the overall numbers because of a shortage of nitrous gas required for anaesthesia," she added.

Nearly all the beds at the cancer hospital were occupied before the flood situation worsened in the state, informed the doctor, adding that the authorities have had to send patients home or to safer locations.

Meanwhile, speaking to The Better India, Padma Shri Awardee Dr Ravi Kannan informed that they are ensuring that treatment of poor patients doesn’t stop. He said, "We’ve created a raft. We took four lorry tubes and put plywood across them and tied it up. We’re ferrying patients up and down across that in front of the hospital," says Dr Kannan in an interview with The Better India.

Meanwhile, at least five more people died after drowning in the flood waters in the state in the last 24 hours. Barpeta, Cachar, Darrang, Karimganj and Morigaon districts recorded one death each.

The total number of affected people stood at 22.21 lakh in 28 districts on Sunday, according to a bulletin issued by the Assam State Disaster Management Authority (ASDMA).

The rivers Kopili, Barak and Kushiara are flowing above the danger level. 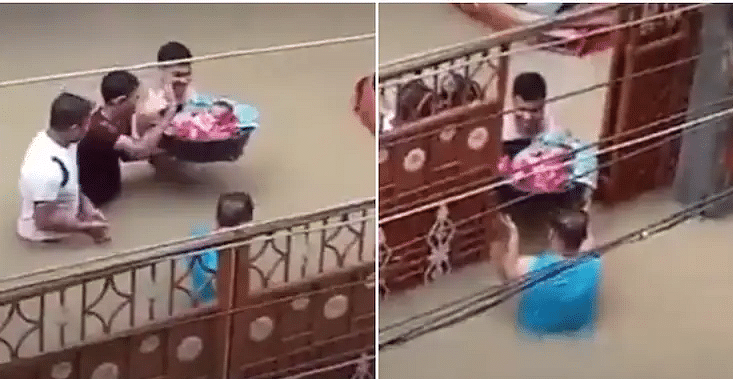 HomeIndiaAssam floods: Patients get chemotherapy on road as hospitals submerge