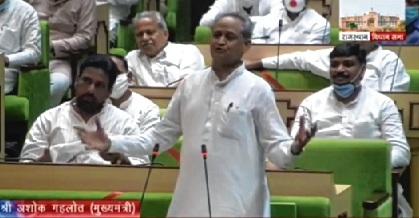 The Ashok Gehlot government on Friday won the confidence motion in the Assembly to bring the 35-day-long Rajasthan political crisis to an end. The motion was moved by Parliamentary Affairs minister Shanti Dhariwal and was passed through a sound vote. With the Pilot camp back in the partyfold and the support of independents and others, the govt comfortably won the vote.

Taking a U-turn from its announcement, the Opposition, BJP, did not bring about a no-confidence motion. It had on Thursday announced it would do so, but on Friday it did not move an application with the Speaker.

"Winning the trust vote is a message to the forces trying to destabilise elected govts in the country. Their every tactic failed in Rajasthan. It is the people’s unwavering trust in us and unity of our Congress MLAs th­at has brought this victory," said Ashok Gehlot, Rajasthan Chief Minister.

Sachin Pilot said, “The government has won a confidence motion with good majority. It has put an end to all speculations and discussions. Congress legislators and party supporters have exhibited unity and despite all efforts of the opposition the confidence motion has been passed in favour of the government with a huge majority. I am happy about it. In the coming times the entire state will work together to face challenges related to Corona, economic issues, farmers and youth. In its remaining tenure the government will fulfil all the aspirations of the people.”

The debate on the motion lasted over three hours with the Congress and the BJP levelling accusations at each other. Gehlot said, “BJP had conspired in Madhya Pra­d­e­sh, Karnataka, Maharashtra, Goa, Manipur and Aruna­chal. They applied the same tactics in Rajas­than, but have been exposed. " 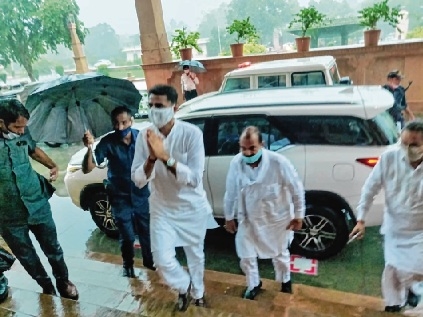 Sachin Pilot handled with aplomb the awkward situation that arose in the Assembly after his seat was changed on Friday. As Rajasthan Deputy Chief Minister, Pilot earlier had a seat in the front row close to the Chief Minister, but on Friday he was shifted to a back seat close to where the section of the ruling party ends and that of opposition begins.

BJP leader of opposition Rajendra Rathore, taking a snipe at CM Ashok Gehlot for his earlier comment on Pilot not having enough political grinding went on to detail Pilot’s experience. He said his seat was changed after the political tussle in the party.

Not waiting for an adequate opportunity to respond, Pilot interrupted, saying, “As the discussion mentions me I would like to say, earlier I was part of the government and would sit in the front, but today I am seated at the border (‘sarhad’). And do you know who is sent to the border — the strongest soldier.”

“My collegues and I have consulted a doctor in Delhi, told about our malaise, are getting treatment and are now back. All 125 are here together after ending everything. Let me tell you, I will be positioned on this ‘sarhad’ (border) like a shield, an armour, a baton and a spear to keep it safe,” said. 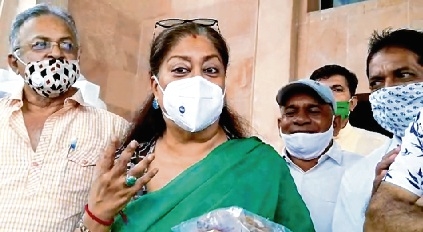 Entering the Rajasthan Legislative Assembly corridor on Friday morning, an unknown photojournalist made an unclear reference to Pakistan to BJP leader Vasundhara Raje, who was wearing a green sari. After hearing the comment, the former Rajasthan CM looked confused and went ahead for the session. Later, the reporter who blurted the word ‘Pakistan’ said he wanted to say ‘Rajasthan’.

The Rajasthan HC will on Monday deliver its verdict on the plea by BJP MLA Madan Dilawar and the BSP challenging the merger of 6 MLAs with the Congress. After hearing the arguments, the single-judge bench of Justice Mahendra Kumar Goyal started dictating its decision on Friday but could not complete it due to the paucity of time. It will resume on Monday.