The sins of the past are to be heaped on the present. And nothing could be more frightening than slums – both for people outside and for those trapped inside. Maharashtra has begun its focus on slums. Expect other states to follow soon.

Maharashtra’s palpitations are understandable. It is the state with the largest slum population, dwarfing even Andhra Pradesh (see table). If the growth rate of the last decade (25.1% from 2001 to 2011) is taken as the norm, Maharashtra should have some 1.5 crore of slum dwellers. That is about 10% of the state population of 12.7 crore. 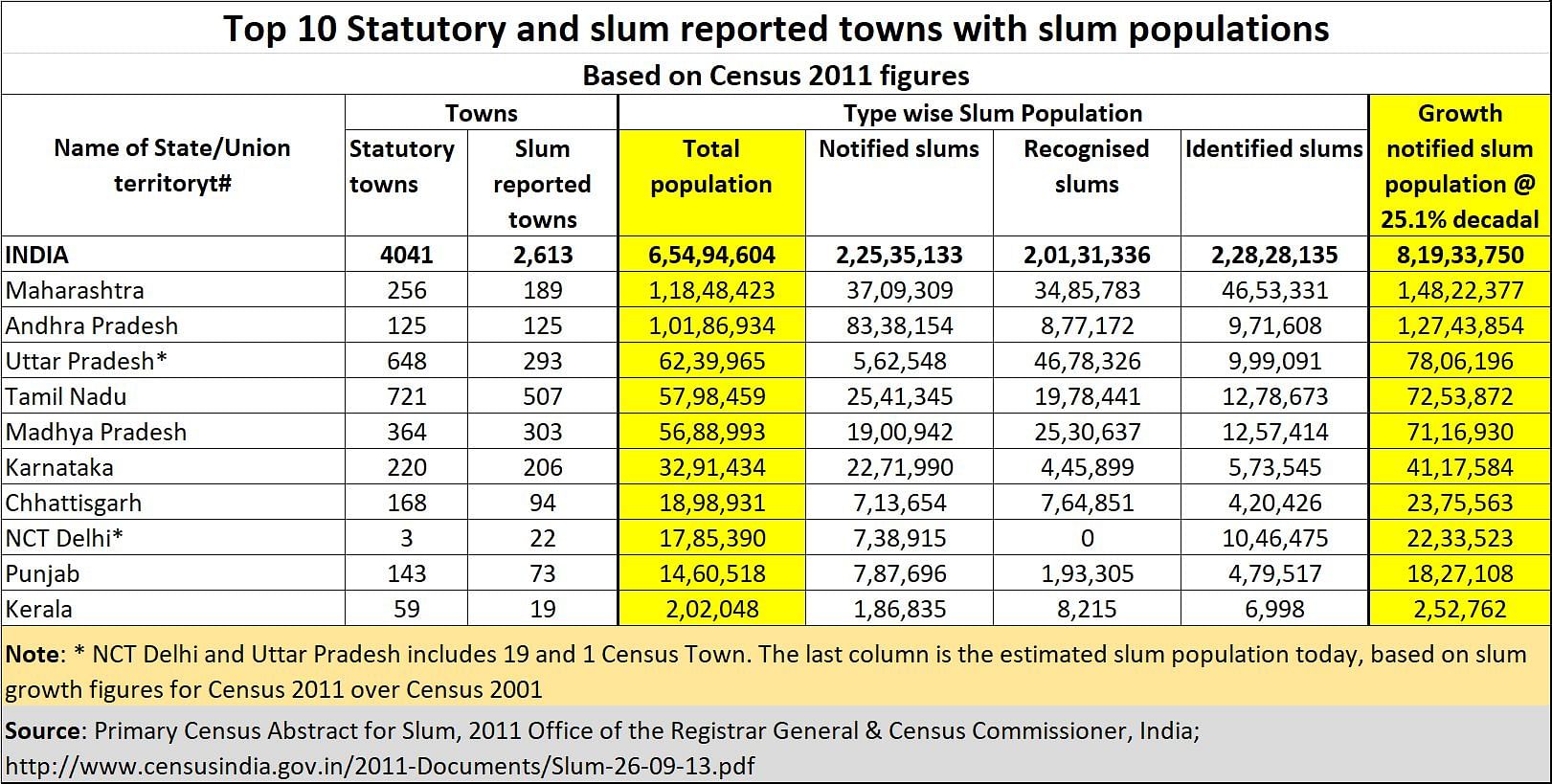 For decades politicians – especially in Maharashtra --, but actually across India -- sold potential slumdwellers a dream. They identified a leader, a crowd-puller. “Come to me”, the crowd-puller said.

“Go forth,” commanded the crowd-puller. “Squat on government land, and I shall protect you.” The government land was invariably in a bustling city, from where migrating to jobs, or starting a vending outlet would be easy. The cash that the slumdweller made was shared by the crowd-puller and his minions (in India they call it hafta). Municipal inspectors were also given a share of the booty.

The crowd-puller then pleaded with the legislators to regularize the slum.In some cases, the land-grab and squatting rights were given to scheduled castes and tribes, so that any attempt to evict them would be called atrocity against the downtrodden.It was so brilliantly conceived. Politicians would also get the votes they needed.Democracy be damned. 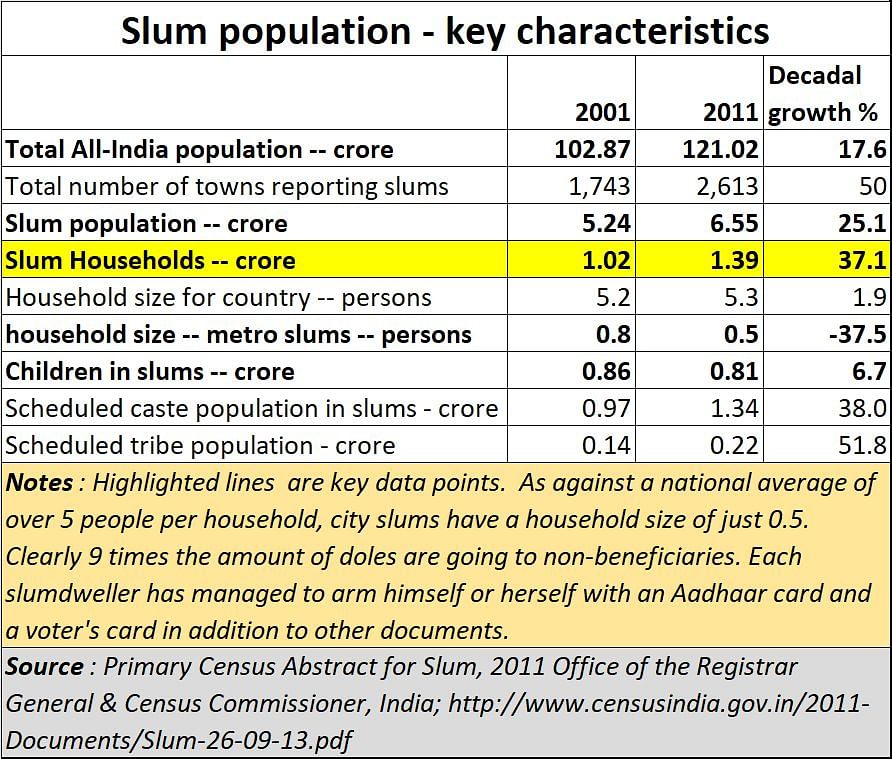 So, the slums got regularised. And each household was given a free flat – from 350 square feet to 500 square feet. They called it regularization. The courts vetted on humanitarian grounds.

Yes, there were bogus households. Study table 2 and you will see how the game is played. The legislators knew all about bogus households. But they urged people to look the other way. The booty is to be shared, isn’t it, they asked. Everyone benefits. The politicians chortled. And we could be shown as having a concern for the downtrodden, for the helpless and the shelterless. The songs were seductive, all right.

Nobody bothered about the message that legislators were sending to people – don’t bother about being right; instead demand the illegal as your birthright.

The Election Commission also looked the other way. He refused to ask the question, can an illegal address on an illegally acquired land be treated as the address for granting voting rights?

After all, all legislators wanted a way to create votebanks. They had found a way to win votes in an area where the local community did not want them. Democracy be damned. This was better than stuffing ballot boxes. What an exciting game!

Some governments like Maharashtra even decided to waive property taxes in perpetuity. The taxpayers can pay for the loss to municipal receipts, they chuckled.

The day of reckoning

So long as it was malaria, or diarrhoea in slums, it was all right. It was a disease which afflicted the poor. The rich and the privileged were still safe.

Then came Covid1- or coronavirus. The rich were the targets. It spread through aeroplanes and through cruise ships; in conference rooms as well. Yet it could be carried and spread by the poor. Now could get to the rich and the powerful as well. Now the slums have begun to haunt the politicians. They are giving it special attention and focus.

Suddenly India’s legislators have begun waking up to the great danger they are confronted with. And a big problem too.How do you lockdown a slum?How do you enforce social distancing in a slum where more than 3-4 people live in a room – never mind official statistics which showed less than one person (fractions are permitted on paper) as a size of each slum household.

They had begun to acknowledge the absurdity of having a household size of just 0.5 people per household, confirming that entitlements for slums had become ten times larger than they ought to be (subsidised electricity, water, gas cylinders and rations are given to households, not the numbers of people). The slum dweller voted the crowd-puller to power during elections. The crowd-puller had protected them. Now coronavirus had made that relationship uncomfortable. The slumdweller was now the big threat to the crowd-puller’s own existence.

With climate change and rapid urbanization, the prevalence of epidemics has become more frequent than in the past century. If coronavirus goes, expect another to erupt periodically. With more epidemics, slums have begun to threaten the powerful and the privileged.

The politician was now between the rock and a hard place. He could not do without slums as his power base depended on them. He couldn’t keep them either, because now they would spread the disease. It was after-all impossible to lockdown a slum.

Look at the numbers., Watch how many more cities have begun to sprout slums – almost all of them politician protected and abetted.

So, will the legislators treat each slum as a concentration camp? Will they insist that exit and entry would only be reserved only for those who are given a cleat chit of health each time they come in or go out? Wouldn’t that create a public whiplash? Or will there be an attempt to allow more slum dwellers to die? To smother them?

Cynics see the decision to allow private clinics to charge Rs.4,500 per Covit-19 test as an attempt to allow more poor people to die. The rich can afford Rs.4,500. The poor must go to government hospitals -- the likes of Kasturba Hospital in Mumbai, where even if you don’t have Covid-19, the surroundings and the crowds milling around the hospital will ensure that you get it. The absence of free sanitary isolation wards will be denied to them – Kasturba has common toilets for isolation wards, ensuring that the virus spreads faster.

Within the slums, people huddle 3-6 people per room, making a mockery of social distancing. They cannot go out of a slum; nor can they stay in. Unfortunately, most housemaids and ward boys come from such slums. Now you realise that you cannot do without them, and you cannot do with them either.

This is the crisis India’s administrators face. The sins of creating votebanks are coming back to haunt them. The dangers of marginalizing original voters are rearing their heads as in a horrifying nightmare.

Assam was just a rash, a pimple of a political movement. Now Covid-19 has made it an Armageddon. Covid-19 has become the great leveller. It could perhaps become the biggest nemesis India’s legislators will face.