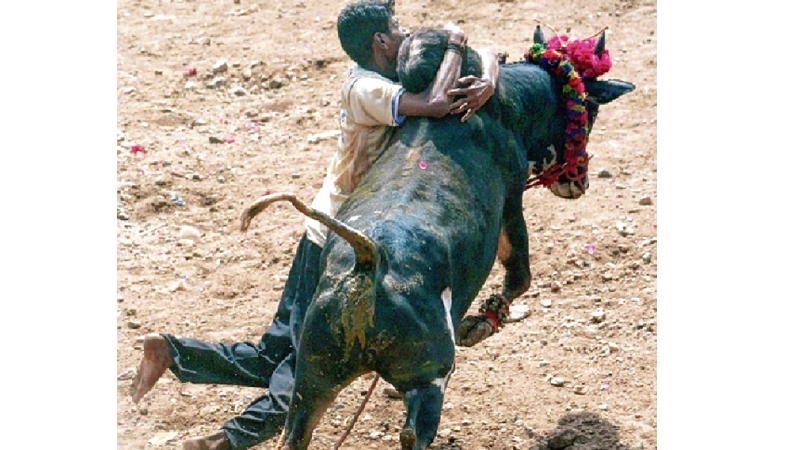 Madurai : Determined in their efforts to conduct ‘Jallikattu’, people, on Saturday,  mounted pressure on the Central and state governments by launching agitations against the ban on the bull taming sport, leading to detention of 149 protesters.

The die-hard supporters of the sport along with major political parties in the state have been demanding an ordinance for conducting Jallikattu after the Supreme Court imposed a ban on it.

While Jallikattu is held in Avaniapuram on Pongal day, it shifts to Palamedu and Alanganallur in the district during the next two days.

While 68 villagers were detained at Alanganallur staging a rail roko, several groups of young men led by film director Gowthaman, were held at Avaniapuram bus-stand near here for demanding lifting of the ban on the sport, police said. “To ensure maintenance of law and order and compliance of Supreme Court orders, we detained Gowthaman and 148 others,” Commissioner of Police, Madurai City, Shailesh Kumar Yadav told PTI.

He said while the police allowed the film director to address the gathering for about 15-20 minutes, but his speech became “instigating” later. On claims that symbolic Jallikattu was held in one or two places to show opposition to the ban, Yadav said, “No Jallikattu was held and nothing will be held. We are ensuring that law is followed.”

He said all across the 27 km of the city and suburbs, adequate police personnel have been deployed to ensure that none got anywhere near the ‘Vadivaasal’ (entry points for bulls to the open grounds where Jallikattu used to be held).

In a village off Alanganallur, a youth climbed a mobile phone tower seeking nod for Jallikattu. CPI state secretary R Mutharasan and PMK chief Ramadoss claimed that the protesters were lathicharged at Avaniapuram, and demanded action against those responsible.

Police, however, said the protesters were only detained. Meanwhile, BJP’s state president Tamilisai Soundararajan told reporters in Coimbatore that the party had been hopeful and was expecting that the Supreme Court would give a favourable verdict on Jallikkattu. But the postponement of verdict has come as shock to all, she said.

On demand for resignation of Union Minister Pon Radhakrishnan for his failure to see the Jallikkattu through this year, Tamilisai said it was not right to make such a demand.

PETA had been opposing Jallikattu and wrote to the President and the Prime Minister on Friday arguing against any ordinance for holding Jallikattu in the state. The animal rights group has come under severe attack from Jallikattu supporters who even demanded that PETA be “banned”.            —PTI