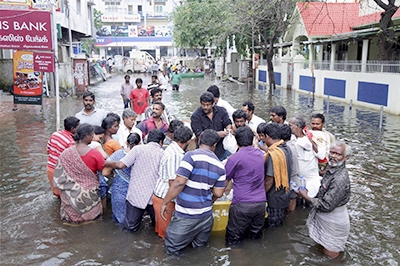 Chennai : With water receding from most areas in Chennai and its suburbs, sanitation and conservancy workers face the mammoth task of removing one lakh tonnes of stinking garbage littering the streets as bright sunshine further eased the situation.

Over 30,000 sanitation workers have been pressed into service to quickly clear the rubbish including polythene bags, mattresses, rotting foodgrains and other household articles strewn across the city in the aftermath of the unprecedented deluge to prevent the outbreak of epidemics, though no such instances have come to light so far.

According to the Municipal Corporation of Chennai, 10,000 tonnes of garbage has been removed so far during the last two days.

A total of 22,500 sanitation workers of the corporation, besides 8,000-odd sourced from elsewhere, are working overtime to dispose of the waste on 600 vehicles at their disposal, officials said.

Despite the sun shining bright for the second day running, stagnant sewage water due to choked drains in some areas like T Nagar was posing a major health hazard, becoming breeding grounds for mosquitoes and other pests.