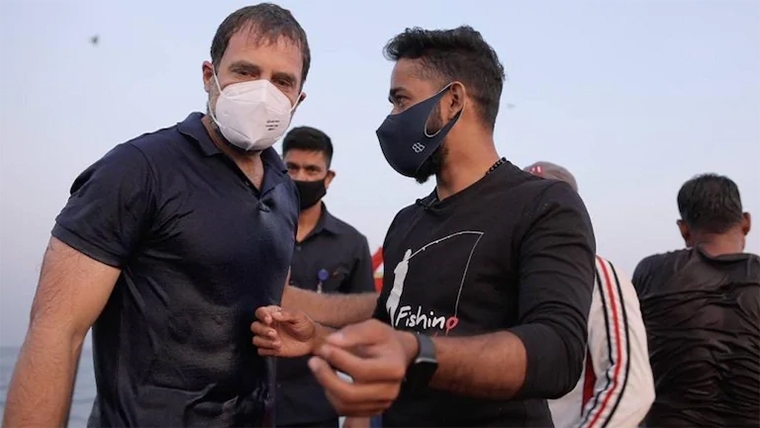 Congress leader and MP Rahul Gandhi took internet by storm with a latest picture of him just after his much-talked-about dive into the sea on February 24. The centre of attraction being that the outline of his abs were faintly visible through his shirt. His picture has gone widely viral on social media and has been gaining praises and flooded with questions for his fitness. It seems that the leader does not seem to have missed any gym sessions during the lockdown.

While former Congress MP and minister Rajiv Shukla was amazed at the fact that Gandhi has abs, boxing champ Vijender Singh called Gandhi's abs that of a ‘boxer’s’.

Here's a look at the tweets:

⁦@RahulGandhi⁩ has got abs also? Watch this photo closely. This is after he was swimming in sea pic.twitter.com/hlnXu7xMVV

Requesting Shri @RahulGandhi to share some tips with everyone on getting those abs. #FitnessGoals #Fitness pic.twitter.com/U3BILlewiR

There are very few politicians who care about their bodies, one of them is shri Rahul Gandhi @RahulGandhi #abs pic.twitter.com/xG7rhIP89W

Happy to see @RahulGandhi JI having abs. Fitness should be a main criteria for every. Inspiring 🙏🏻

On February 24, Rahul Gandhi interacted with fishermen in Kerala’s Kollam. Gandhi, who had been visiting the state for the previous two days, also went out to sea on a boat with the fishermen.