A year on, wheels of justice turn slowly in Hathras rape case - Know more about the progress made 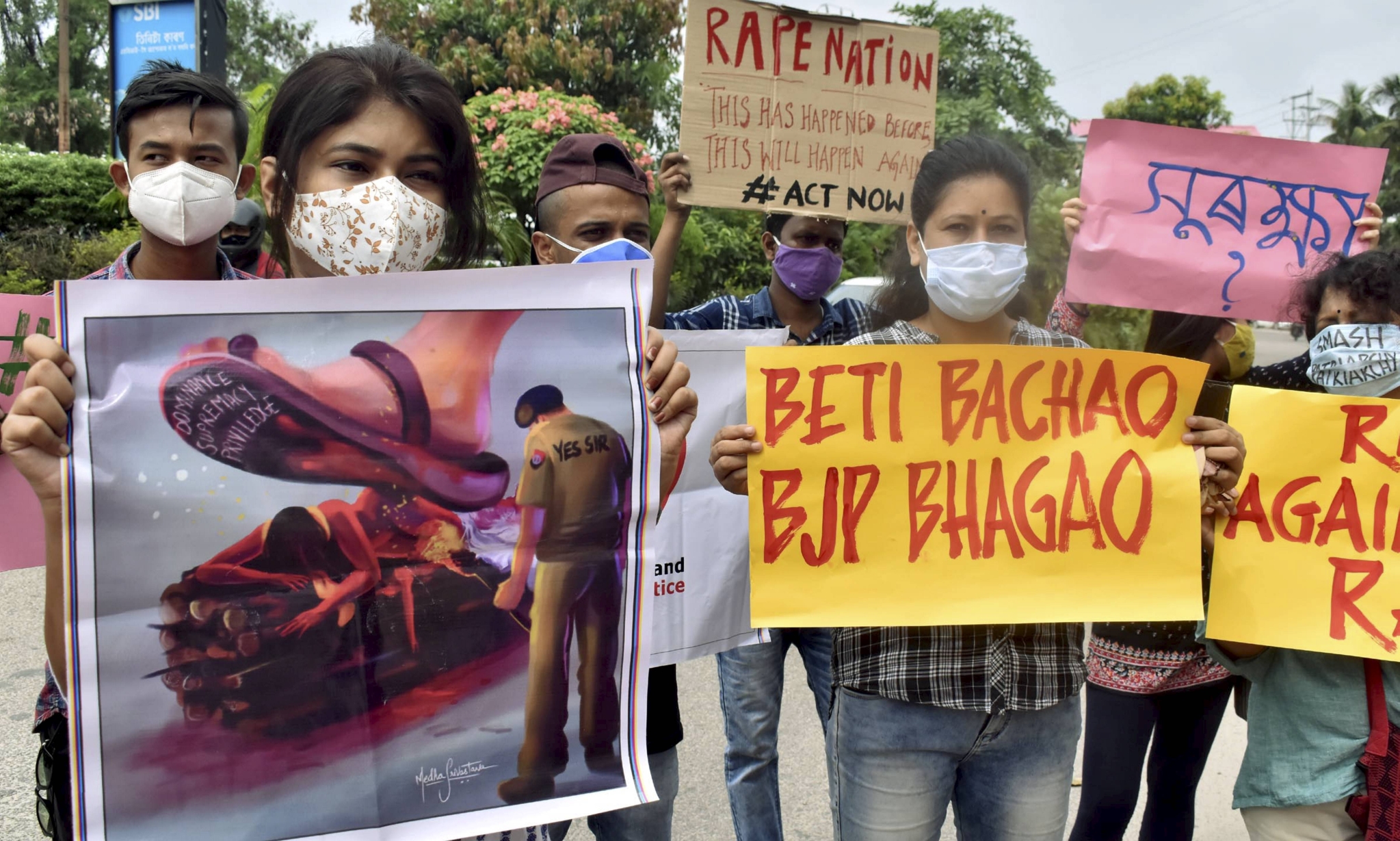 Activists hold placards during a protest over the death of a 19-year-old Dalit woman after an alleged gangrape in UPs Hathras, in Guwahati, Saturday, Oct. 3, 2020. | Photo: PTI

In September 2020 the Hathras rape case had sparked pan-India fury, dominating news headlines and catching the eye of top politicians. A 19-year-old Dalit woman had allegedly been gangraped by four upper-caste men in Hathras on September 14. Two weeks later, she had succumbed to her injuries, being cremated in the dead of the night near her home on September 30.

She died in the hospital, roughly two weeks after the attack that had left her badly injured. According to a PTI report quoting a spokesperson of the Aligarh hospital she had been admitted to, her legs were completely paralysed and arms partially paralysed. She died on September 29 at Delhi's Safdarjung Hospital during treatment.

There were several subsequent developments. While her family insisted that they were forced forced by the local police to hurriedly conduct her last rites, local officials contended that the cremation was carried out "as per the wishes of the family". The Uttar Pradesh police also insisted that the forensic lab report had not indicated rape even as an SIT was formed to probe the allegations. A day later, Chief Minister Yogi Adityanath suspended Hathras SP Vikrant Vir and four other policemen over the gangrape-murder case.

Meanwhile, the victim's family was provided with CRPF security as large groups came together in support of the accused individuals. On October 5th for example, reports and visuals suggested that supporters of the four accused had rallied together for a protest event. This had reportedly been organised by a local BJP leader and former MLA and saw members of the Bajrang Dal, Karni Sena and the RSS in attendance.

Amid angry protests across the country a slew of Opposition leaders had also visited the area and met with the victim's family assuring help. Notably, Congress leaders Rahul and Priyanka Gandhi had even found themselves detained by the police while undertaking the trip to Hathras.

Months later, came the CBI chargesheet which said that the Dalit victim was gang raped and tortured by four men, eventually leading to her death in a Delhi hospital. The four “upper caste” assailants have been charged by the CBI with gang rape and murder. But the 2,000 page chargesheet based on the victim’s dying declaration only seemed to make the situation grimmer.

Two days after the CBI charge-sheeted the four accused of gang-rape and murder in the Hathras case, reports quoting the victim's family indicated that they wished to move out of the village. "The families of the four accused are influential people in the village and the four-five Dalit families in the village want to stay out of 'trouble' and will not support us. There are over 63 upper caste families who do not even talk to us. The atmosphere has turned even more hostile after the charge-sheet was filed on Friday," read a quote from one of the victim's brothers.

This was in December 2020. Since then, things have remained in a state of limbo as the case continues. The four men may have been put on trial for rape and murder, but not much has changed for the people of Hathras. According to a recent BBC report, her family feels as though they are prisoners in their own home, with their lives on hold. Meanwhile, the families of the accused continue to insist upon their innocence.

The recent article tracked the lives of those waiting for a legal resolution to reveal that the family remains isolated in their village, guarded by gun toting paramilitary officials with security cameras monitoring the situation at all times.

"We can't go out to work. We are surviving on the compensation money and government rations," the BBC report quoted a family member as saying. According to the report, six of the family's seven buffaloes have been sold since they can no longer go out to collect fodder. The authorities, they add, are yet to deliver on their promise of a new home and a government job for one family member.