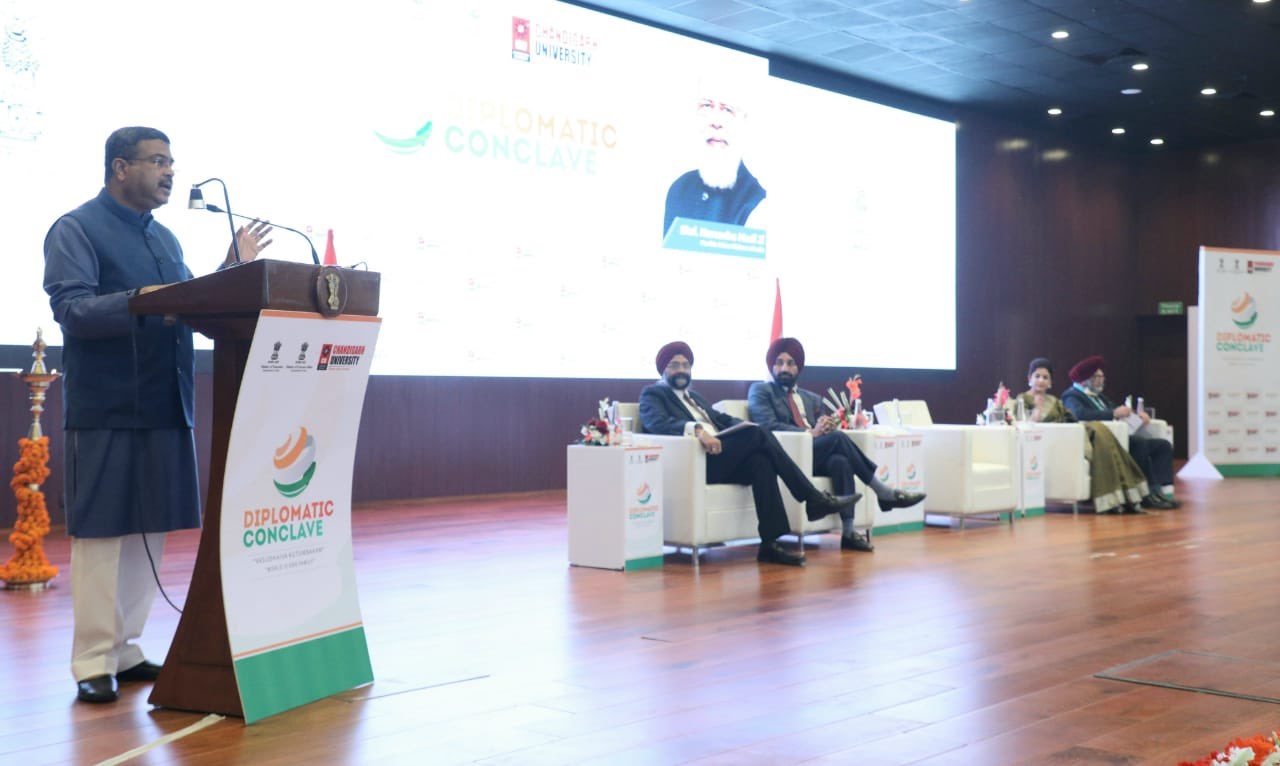 As many as 130 nations endorsed Prime Minister Narendra Modi's vision on internationalisation of education while participating in the Diplomatic Conclave organised by Chandigarh University, Punjab under the guidance of the Ministry of Education, and Ministry of External Affairs, Government of India.

The idea of global partnership in the field of education, which is the theme of the Diplomatic Conclave has drawn immense response internationally, as validated by the presence of Ambassadors and Senior Diplomatic from 130 nations, who attended the Conclave.

Prime Minister Shri Narendra Modi conveyed his thoughts on the theme of the Diplomatic Conclave. The Diplomatic Conclave being organised by Chandigarh University is deeply rooted in the tenet of 'Vasudhaiv Kutambakam' (the whole world is one family) and has brought together a mini-world on a common platform for fostering global partnerships in the field of education, Prime Minister Narendra Modi said.

The prime minister stressed in his message, "India's New Education Policy emphasises on connecting our young generation with a modern and national education system while drawing inspiration from our proud heritage. The objective of the education reforms is to make learning holistic and empower our youth."

The Prime Minister said that the coming together of Ambassadors and Diplomats of SAARC countries, ASEAN countries, nations of African Union, European Union, OIC and several other countries at the Conclave will facilitate a vibrant exchange of thoughts, leading to a roadmap for mutual partnerships between nations in the field of Education. "I am sure that the discussions at the Conclave will lead to preparation of a strategic blueprint for greater synergy internationalisation of higher education," he said.

Inaugurating the Conclave, Union Minister of Education, Shri Dharmendra Pradhan pitched the Government of India's agenda of making India a Vishwaguru through the concept of establishing Global Partnership amongst the nations in the field of Education, Research and Innovation.

Addressing the audience, Minister Pradhan spoke about India's inherent strength as a knowledge centre of the world and the role of education in shaping India's place in the post-COVID new world order. Minister Pradhan outlined the vision for India's education system and said that enabling policy structure in the form of National Education Policy 2020, quality educational institutions, societal inclusivity with multiculturalism and focus on innovation, entrepreneurship and internationalisation will drive India's education system to newer heights.

Mentioning India's age-old belief in 'Vasudhaiva Kutumbukam', he called for working towards preparing global citizens and working together with common understanding to address common global challenges and achieve common goals. Minister Pradhan mentioned that he was glad to note that more than 120 countries were represented in the conclave."

During the Valedictory Session of the conclave, Union Minister for External Affairs, Dr. S. Jaishankar noted that quest for education has for long mobilised students, both Indians going to other countries and the foreign students studying in India.

"The challenge today is to re-imagine this two-way interaction and make it work better for the world as whole. It is only when exchanges of ideas, creativity and knowledge are more diversified that we can really strive for multiple art and democratic world," said the minister in a special video message for the ambassadors and diplomats.

"I believe that today's event is one step in that direction and it will help in promoting and fostering greater International cooperation," he concluded. Shri Harsh Vardhan Shringla, Foreign Secretary, who was the chief guest at the Valedictory session also interacted with the Ambassadors and the Diplomats.

"I am glad that Chandigarh University and its Chancellor Satnam Singh Sandhu have taken the initiative to organise this Diplomatic Conclave with a view to strengthening India's rising position in the world of higher education," he said. The Ambassadors expressed their views on the deliberations held during the Conclave.

Gloria Berbena, Minister Council for Public Diplomacy, U.S Embassy in India said, "India's New Education Policy is a significant step towards in its journey to become a global knowledge economy. The NEP is providing the opportunity to further strengthen the India-US educational links to innovate and improve the skill-based embed creativity in higher education."

Dr. Stephen Grabherr, Deputy Chief of Mission, Embassy of Germany in India said, "India's role in the world has become increasingly important in recent years. The world has seen this rise of India and now it is reaching out to the world with its New Education Policy which will surely transform the idea of global education."

Hailing India's New Education Policy, Ian Biggs, Australian Deputy High Commissioner to India referred to it as an impactful and innovative policy and also showed the willingness to implement India's New Education Policy in Australia. The Ambassador hoped that the Government of India will lead the way in formulating a remarkably comprehensive global education system, the benefits of which all the countries would reap.

Freddy Svane, Ambassador of Denmark to India said that the discussions and deliberations at the Conclave gave a remarkable insight into the transformation of global quality education, which will be led by India's New Education Policy.