Why was statement of Salman’s driver not recorded? asks Lawyer 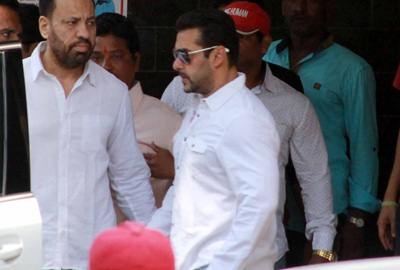 Mumbai: Picking holes in prosecution arguments in the 2002 hit-and-run case, the lawyer defending convicted filmstar Salman Khan today sought to know in Bombay High Court why police had not recorded the statement of his driver when they interrogated him after the mishap.

It is Salman’s case that he was not driving the car at the time of mishap and his driver Ashok Singh was behind the wheel. Singh had appeared as a defence witness in the trial court which did not accept his version, saying he was a “got-up witness” who just wanted to save his master.

The 49-year-old actor was convicted by a Sessions Court on May 6 and sentenced to five years in jail for running over his car on people sleeping outside a shop in suburban Bandra on September 28, 2002. One person was killed and four others were injured in the mishap.

The actor, who is out on bail, was also found guilty of driving under the influence of liquor. Aggrieved by the verdict, he filed an appeal in the High Court, which has suspended his sentence.

Senior Counsel, Amit Desai, defending Salman, sought to know why the police were saying Singh had surfaced only now (13 years after the incident). He referred to the deposition of prosecution witness 27 (the then Senior Inspector of Bandra Police Station), who said he had called Singh and interrogated him.

“The word `interrogated’ is very important here…and he also says he has not recorded his (Singh’s) statement. What is the purpose of interrogation without recording a statement?” Salman’s counsel asked. The lawyer said at the tail-end of trial, the police had produced evidence to show that Ravindra Patil, the police bodyguard of Salman who was seated with the actor in his car at the time of mishap, had passed away and the prosecution was relying upon his statement in the trial.

“If a star witness (Patil) was no more, there were other eye witnesses to throw light on who was driving the car. While the prosecution says there were three people in the car, the defence has argued that there were four…but there is no dispute over the fact that singer Kamaal Singh was also in the same car at the relevant time. Why he has not been examined?” Desai asked.

Salman’s lawyer also referred to testimonies of two police officers who said they had visited the actor’s home at Galaxy Apartments in Bandra soon after the mishap to look for him but did not find him either in the house or the gym he frequented. “If that was the case, was any search panchnama drawn?” he asked.

“The police had made out a case that Salman had run away after the mishap. In fact, he voluntarily came to the police station and surrendered. Please consider if this can be the conduct of a person who has run away.”

Desai argued that while one person succumbed to injuries in the mishap, other wounded were crying for help but police wasted time in arranging medical aid for them.

Instead of taking them to a nearby private hospital (Holy Family) which was just opposite (the mishap spot), police took the injured to civic-run Bhabha Hospital, located a little distance away, he maintained.

To this, Judge A R Joshi remarked, “A hospital is a hospital whether public or private.” The defence lawyer questioned the police claim that Salman’s blood sample was not obtained at Bhabha Hospital because such a facility did not exist there.

“This is not just possible that the facility did not exist in a municipal hospital and for this reason they took him to another hospital.” The defence argument will continue tomorrow. The actor has pleaded in his appeal that the trial court wrongly convicted him under the culpable homicide charge because he had no knowledge that he would meet with a mishap.

Apart from being convicted of ‘culpable homicide not amounting to murder’ by the trial court, Salman was also found guilty of offences under IPC Sections 279 (rash and negligent driving) and 337 & 338 (causing hurt by acts endangering life or personal property of others), which prescribe six-month jail.

He was sentenced to undergo jail for six months under Sections 181 (driving without licence) and 185 (drink driving) of Motor Vehicles Act. Salman was also found guilty under Bombay Prohibition Act for which he received two months’ imprisonment and fine of Rs 500. All sentences are to run concurrently.