What would Sonia have  done? queries Sushma 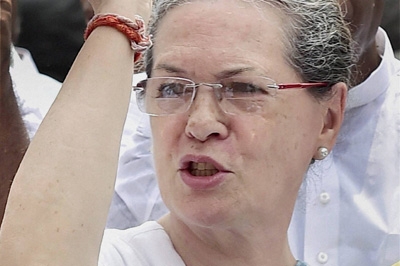 New Delhi : An emotionally charged Sushma Swaraj on Thursday attempted to ”put the record straight” on the Lalitgate allegations by claiming that she had never recommended nor requested the British govt to provide travel documents for Lalit Modi. She clarified that she had only written (when asked) that if the British govt issued documents to Modi it would not impact Indo-British relations in any way.

”I have never helped Lalit Modi. I only tried to help an ailing woman who is an Indian citizen and against whom there has never been any case or complaint of any kind? , Swaraj said emphatically in a choked voice.

After quoting from hospital documents and other supporting papers explaining the critical status of Modi”s wife, Sushma addressed Speaker Sumitra Mahajan, ”I ask you what would you have done in my place? What would Soniaji have done?”

”If it is a crime to help such a woman, then I admit before the entire nation that I have committed this crime and I am ready to undergo whatever punishment this house may choose to decide for me”, she said.

Swaraj further argued that had she recommended for travel documents, the UK Home Office papers would have written that the travel document was issued on the recommendation of the Indian External Affairs Minister but the papers clearly state that documents were issued as per their rules.

Sushmaj”s effort to clear herself from the allegations on the floor of Lok Sabha appeared much more effective than the Upper House as the opposition benches continued their boycott. Swaraj, however, asked the Speaker to have a debate on the issue once the suspension of Congress would end this week and the boycotting members would be back in the house.

The Congress and BJP issued whips to party MPs asking them to be present in full strength in the Rajya Sabha on Friday as tension mounted over suspension of 25 Congress MPs in Lok Sabha, Vyapam scam and Lalit Modi row.

A three-line whip was issued by the Congress asking all its MPs to be present in Rajya Sabha amidst a view within the party that the government may try to slip through some legislative measures. “We have issued a whip and asked all the members to be present tomorrow. There is already a clash between the government and the opposition; we want to be in our full strength even on Friday, which is normally a day for Private Member Bills,” said Satyabrat Chaturvedi, Congress’s chief whip in Rajya Sabha. Asked about the development, the deputy leader of Congress in the House, Anand Sharma, said the party had acted thus as a matter of precaution since BJP has in the past slipped through certain legislative business in the other House, bypassing the Business Advisory Committee. BJP also issued a whip asking all its members in Rajya Sabha to be present in the House tomorrow.