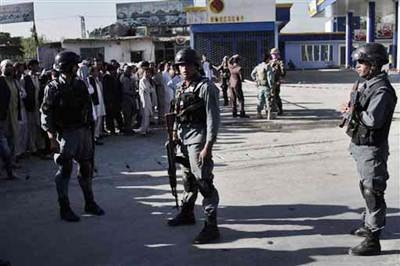 Afghan police soldiers inspect the site of a suicide attack in Kabul, Afghanistan, Monday, June 20, 2016. At least a dozen Nepalese security guards of a foreign logistic company were killed Monday when a Taliban suicide bomber targeted their minibus in the Afghan capital, interior ministry and an Afghan security official said. (AP Photo/Rahmat Gul) |

Kabul: Two buses transporting police cadets in the Afghan capital were struck by a suicide bomb attack today, government and Taliban sources said, with many casualties feared. The attacks took place in a lower-class district of western Kabul. Sediq Sediqqi, interior ministry spokesman, said, “There were two explosions that targeted the police cadets vehicles on the outskirts of Kabul city.”

The attack was quickly confirmed by the Taliban’s spokesman Zabihullah Mujahid, who claimed “many were killed and wounded”. The Taliban have been waging an insurgency against the government since being ousted from power by a US-led coalition in 2001. Casualty rates have soared since the departure of foreign combat troops in 2014, but earlier this month US President Barack Obama ordered his military to tackle the resurgent Taliban more directly — in tandem with Afghan allies, ratcheting up the 15-year conflict he had vowed to end.

The latest attack comes little over a week after 14 Nepali security guards were killed in a massive blast that left their yellow minibus spattered with blood.