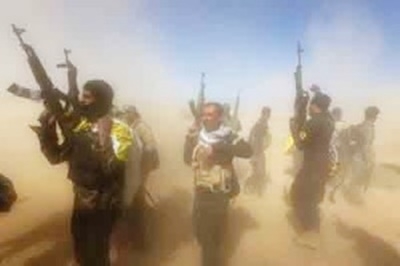 Beirut: Syrian Islamist rebel militias, including Nusra Front, the Al-Qaeda affiliate in Syria, have seized control over new areas in the northwestern province of Idlib following heavy clashes with regime forces. Insurgents from Jaysh al-Fateh (Conquest Army) seized control of Orm al-Joz and Ein Orm al-Joz, among other areas in the vicinity of Ariha city, which was dominated by the rebels on Thursday, the Syrian Observatory for Human Rights (SOHR) reported on Friday.

The NGO added that the fighting against government troops, backed by Iranian soldiers and the Lebanese Shia Hezbollah militant group, was going on in and around Ariha amid regime bombardments. Through its official Twitter account, the Islamic Front, part of Jaysh al-Fateh, confirmed seizing Orm al-Joz, which is located near the road between Ariha and neighbouring Latakia province, one of the Syrian regime’s strongholds.

The Islamic Front released several videos showing the shelling in the Jabal al-Arbaeen area, controlled by the opposition, and around Ariha, where intense exchange of fire was taking place. Syrian official news agency SANA said that the armed forces evacuated their positions in Ariha and have withdrawn toward the defence lines in the suburbs, following heavy clashes with “terrorists of Nusra Front”.  Only a few areas in Idlib are controlled by the regime, including Abu Zuhur airbase. If the opposition forces take full control of Idlib, it would be the second Syrian province to be seized from the regime, after al-Raqqa, which is currently dominated by the Islamic State Sunni radical group.