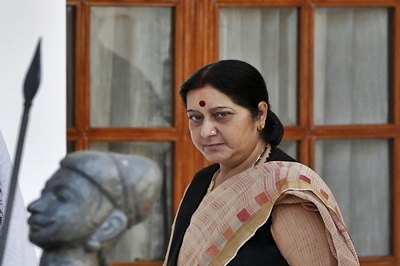 New Delhi : External Affairs Minister Sushma Swaraj will leave for a two-day visit to Pakistan on Tuesday, where she is expected to meet Prime Minister Nawaz Sharif and his advisor on foreign affairs Sartaj Aziz in Islamabad this week.

Swaraj will visit the Pakistan capital to attend the ministerial segment on Afghanistan during the annual Heart of Asia conference on December 9.

Upon her return from Islamabad on December 10, Swaraj will be making a statement on the latest developments that have taken place in diplomatic relations between India and Pakistan.

Earlier, Union Minister of State (Independent Charge) for Skill Development and Entrepreneurship Rajiv Pratap Rudy also confirmed Swaraj’s visit to Islamabad and said that she would brief both the houses of Parliament in detail on the present status of Indo-Pak relations once she returns.

“Sushma Swaraj will be visiting Pakistan tomorrow and once she returns, she will give a detailed statement about the discussions with Pakistan over issues including Terrorism. The government is fully prepared to give an updated status of Indo-Pak talks and this has been communicated to both the houses,” Rudy told the media outside the Parliament.

Earlier, Pakistan Prime Minister’s Advisor on Foreign Affairs Sartaj Aziz had said the deadlock in Indo-Pak ties had eased to some extent and he is looking forward towards the bilateral talks with Sushma Swaraj which would focus on the resumption of composite dialogue process.

In a surprising move, India-Pakistan had NSA-level talks in Bangkok on Sunday on a wide range of issues including terrorism, Jammu and Kashmir, and border issues.

Post the meeting, both the nations released a joint statement saying that the discussions were held in a ‘candid, cordial and constructive atmosphere’.

According to reports, the meeting was agreed upon by Prime Minister Narendra Modi and his Pakistani counterpart Nawaz Sharif when they met in Paris last week on the sidelines of COP-21.

A joint statement issued later said that the discussions “covered peace and security, terrorism, Jammu and Kashmir, other issues, including tranquility over the Line of Control”.