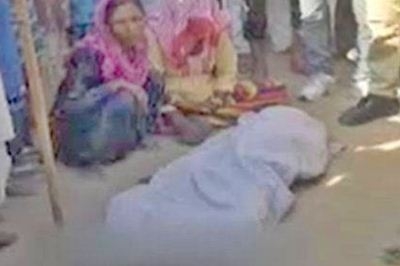 Sonipat (Haryana): A Special Investigation Team has been formed to probe the death of a 15-year-old Dalit youth in Gohana here, a day after two ASIs were booked on murder charges following allegations from the family that he died in police custody.

On the directions of Jadhav, a SIT had also been formed to conduct further investigations in the case. “The SIT will be headed by Rohtak Police DSP rank officer Amit Bhatia,” Superintendent of Police, Sonipat, Abhishek Garg said today. He said the situation in Gohana town was peaceful after protests by the boy’s family, which had alleged that he was beaten by police and died in custody after being accused of pigeon theft. The two Assistant Sub-inspectors were booked on murder charges and also under sections of the SC/ST (Prevention of Atrocities) Act on the direction of National Scheduled Caste and Scheduled Tribe Commission.

Yesterday, Chief Minister Manohar Lal Khattar had told reporters here that “the post mortem report will throw light on why the suicide took place and for what reasons.”  He had said the boy’s family was involved in a dispute with another family over some money and pigeon and that the boy was not questioned and he had himself gone to the police station. Congress had attacked the Chief Minister for claiming that the boy had committed suicide even before the investigation was completed. “When Chief Minister of the state like M L Khattar will pre-judge a case before investigation, may I ask who will punish the guilty in this country. It is shameful, it is condemnable and it is reprehensible,” chief spokesman Randeep Surjewala had said.

He alleged that it reflected a mindset which is anti-dalit, anti-poor and anti-backward that is “taught in the school of RSS and BJP.” The Gohana incident had come close on the heels of two Dalit children being burnt alive at Sunped village in Faridabad district. Meanwhile, in the the post-mortem examination report of the teenager, the doctors have mentioned that “the cause of death in our opinion in this case is hanging which is ante-mortem in nature.” Further the report says, “However, the viscera have been preserved for chemical analysis for detection of any poisonous substance/intoxicant.”

According to Sanjeet Devi, the mother of Govind, “About eight to ten policemen came to our home and put pressure on us to perform last rites then and there.” “Their behaviour was not good and after we denied to perform the last rites they went back,” she had said. The deceased boy’s uncle, Ram Nivas, expressed apprehension that police might harass them in future as well. Khattar has announced that one family member will be given job and they will be provided compensation.