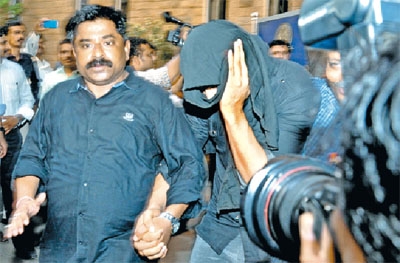 Mumbai :  A day after it was revealed that a small time Mumbai-based model and call girl was allegedly subjected to rape and extortion by two officers and a constable attached with the Sakinaka police station, the eight arrested accused were remanded to police custody until April 29. While the 28-year-old victim in her complaint had named seven people, another arrest in connection with the case was made later by the police.

The alleged incident took place on the intervening night of April 3 and 4 in a hotel in Sakinaka where, according to the complainant, she had been called by a ‘customer’. However, she did not go up to the room and called a male friend of hers instead. When she did not go up, the customer himself came down; by then the police had also arrived, detained the two for questioning and took them to the Sangharshnagar police chowki in a private vehicle.

Here, Assistant Police Inspector (API) Sunil Khatpe (34) allegedly molested her, after which API Suresh Suryavanshi (36) and Constable Yogesh Ponde (36) extorted money from her and her friend, by threatening to charge them for running a prostitution racket.

The victim arranged for cash, jewellery and other articles worth Rs 4.98 lakhs through her friend whom she had called earlier. They were let go after they handed over the goods.

According to an officer in the Crime Branch, the alleged accused are claiming that they had set out to lay a regular trap for a call girl under the Immoral Traffic (Prevention) Act (PITA), which went awry and they ended up extorting money from her. “The officers and the constable say that they had laid a genuine trap. However, according to them the victim did not go up to the room because she did not have proper identity proof. They have admitted to having extorted goods from her but have denied the charges of molestation,” the officer said.

Besides the policemen, five other people, including a woman, have been arrested too. They have been identified as Javed Shaikh (35), Ibrahim Khan, alias Immu (42), Tanveer Hasmi (34), Ayesha Malviya (24) and Sanjay Ronge, alias Rahul (34). While Immu was the decoy who acted as the customer, Malviya had allegedly impersonated a woman constable. The rest of the accused were involved in arranging logistics such as booking a hotel room, arranging for a private car, etc. The arrests took place after the victim approached Commissioner of Police Rakesh Maria about the alleged incident on April 21.

Joint Commissioner of Police (Crime) Atulchandra Kulkarni clarified on Friday that there had been no sexual intercourse, and that API Khatpe has been booked under the extended definition of rape as per Section 375 of the Indian Penal Code (IPC). The Crime Branch is also doing background checks on the victim and the alleged accused persons for criminal antecedents.