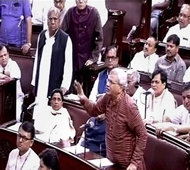 Meanwhile, the Bharatiya Janata Party (BJP) has issued a three line whip to all its MPs in Rajya Sabha and Lok Sabha, asking them to be present in the Parliament till Friday.

The Congress Party, on the other hand, is set to raise the Uttarakhand President’s rule issue in the Rajya Sabha today, even as the government has maintained that sub-judice matters cannot be discussed.

On Monday, around 20 Congress Members of Parliament, including Leader of Opposition in Lok Sabha Mallikarjun Kharge and senior leader K.C. Venugopal, observed a sit down protest near the well of the Lower House as the Uttarakhand issue dominated proceedings.

The leaders also raised slogans denouncing the NDA government over their actions in the hill state. Slogans such as ‘Manmani nahi chalegi’ and ‘Loktantra ki Hatya’ could be heard from the group of MPs sitting on the floor.