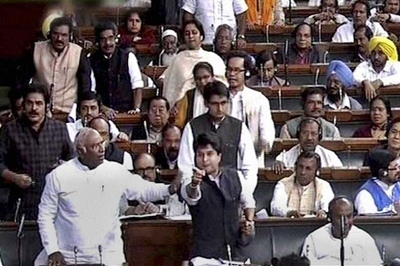 New Delhi: Lok Sabha today witnessed unabated ruckus with sloganeering Congress members holding placards protesting against the government over the Lalit Modi controversy and Vyapam scam, even as the government assured that it was ready to discuss all issues.

Notwithstanding the pandemonium, Speaker Sumitra Mahajan continued with the Question Hour amidst the din of slogan- shouting by Congress members who were in the Well. Left members joined the Congress in the anti-government protest. SP members, along with those from RJD and JD(U), also stormed the Well demanding release of caste census data. As unrelenting Opposition members continued the protests, Parliamentary Affairs Minister Venkaiah Naidu said the government was ready to discuss all issues.

He said the Lalit Modi controversy and the opposition demand for External Affairs Minister Sushma Swaraj’s resignation raised by the Opposition “is just an excuse, they want to stop GST Bill.” The Congress has also been demanding the resignation of Rajasthan Chief Minister Vasundhara Raje on the same issue and that of Madhya Pradesh Chief Minister Shivraj Singh Chouhan over the Vyapam scam. The Speaker’s appeals to the protesting members in the Well to return to their seats fell in deaf ears, saying their conduct was unruly. “I am not going to adjourn the House.”

Congress Vice President Rahul Gandhi was also seen joining party colleagues in raising slogans from his seat and thumping desks. Congress President Sonia Gandhi and SP chief Mulayam Singh Yadav, who had differed with the Congress party about its protests in the House, were seen chatting before start of the proceedings. Earlier, the Speaker rejected notices for adjournment motions moved by various members, including from Congress and the Left on various issues.

Mahajan then took up Question Hour as the noisy protests continued. Responding to a supplementary question relating to food parks in Uttar Pradesh, Food Processing Minister Harsimrat Kaur Badal took a dig at Rahul Gandhi, without naming him, regarding the cancellation of a proposed food park in his constituency of Amethi, an issue that had generated a lot of heat in the last Parliament session.

While members from the treasury benches were seen thumping their desks at the Minister’s reply, Congress members continued slogan-shouting. From their seats, YSR Congress members were also seen displaying placards demanding special status for Andhra Pradesh.