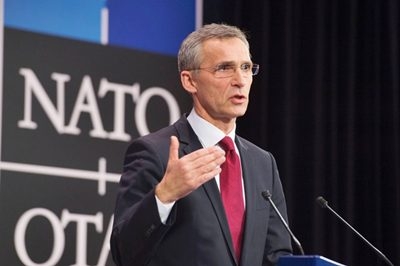 Brussels: NATO head Jens Stoltenberg confirmed today the alliance is discussing whether to hold its first formal talks with Russia since 2014 when the Ukraine crisis plunged relations into a deep freeze. Stoltenberg said NATO and Russia needed transparency to avoid misunderstandings and incidents such as the November shooting down of a Russian fighter jet by key alliance member Turkey after it violated its airspace along the Syrian border.

“We are looking into the possibility of holding a NATO-Russia Council meeting,” Stoltenberg said, confirming a January 20 AFP story that the alliance was considering such talks.

“We have never suspended the Council but we think… now it’s time to look into the possibility for having a meeting,”he told a press briefing on NATO’s annual report for 2015.

“No final decision has been taken but we will also discuss that with the Russian delegation at NATO and then make a final decision on when to have such a meeting.”

US-led NATO suspended all practical cooperation with Russia after its intervention in Ukraine and 2014 annexation of Crimea but it left in place the NRC as a possible channel of communication with Moscow.

The NRC groups all 28 NATO member states, usually at ambassador level with their Russian counterpart, to manage ties. It held a last, frosty meeting in June 2014. Germany has led calls for an opening to Moscow as the West looks to Russia for help on key issues such as Syria and the threat from the Islamic State group.

Stoltenberg gave no further details as to the agenda or timing of an NRC meeting but it is widely expected to take place late next month, after a meeting of NATO defence
ministers, or in early March. Diplomatic sources told AFP last week one possibility was to hold a series of NRC meetings in the run-up to a NATO leaders summit in Warsaw in July.

They said the aim was to help manage a difficult relationship with a more assertive Russia and convey a clear message of “deterrence and transparency.”Stoltenberg and NATO officials stress that while the NRC has not met since 2014, there have been numerous contacts with Russia and he has met Russian Foreign Minister Sergei Lavrov.