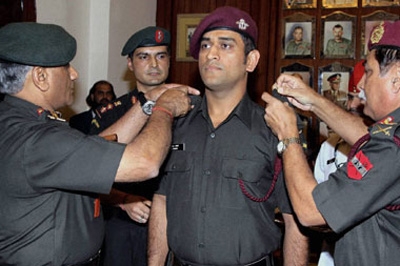 Mumbai : Mahendra Singh Dhoni (MSD) popularly known as Team India’s ‘Captain Cool’ has been sweating harder at an undisclosed location. This time, not to make any record in cricket, but just to earn a military badge -‘Parachute Wings’!

By nature, Dhoni is an adventurous person and his love and passion for bikes has been a known factor among his fans. But now, Dhoni seems to have had enough of the roads and is inclined to ‘fly high’ in the open sky.

After Kapil Dev, Dhoni was conferred the honorary rank of Lieutenant Colonel (Lt Col) in the Territorial Army (TA) which is part of the regular Army on November 1, 2011. On the unusual and special demand, he was assigned the 106 Parachute Regiment – a special force (SF) that is entrusted to carry out beyond enemy line operations.

Recently, Dhoni wished to have a blue-winged-badge with an umbrella – ‘Parachute Wings’ on his olive green uniform. He was told that one has to earn that badge which is fatal and risky.

According to officials, for this medal one has to make five jumps from 10,000 ft from a flying war plane -four jumps in day light and one jump in the night.

He was explained to him that it is dangerous, even beyond imagination. Despite safety measures, on few occasions the parachute malfunctions or suddenly wind direction changes – in the result that one falls, just like a rock from the sky! Besides technical problems, at times, the human body fails to execute instructions due to low level of oxygen in the atmosphere at a height of 10,000 ft. The worst is para-jumping at night. There is no assistance or torch to check the ground, one just bang on the ground like a blind person with a stick.

Despite all briefings and explanations, adventure-lover Dhoni – one of the highest paid athletes in the world, remains adamant on his point to jump from war planes to achieve the medal.

Former Territorial Army Additional Director General (TA ADG) Maj Gen HK Singh in whose tenure Kapil Dev, MS Dhoni, Abhinav Bindra and Mohan Lal were given honorary ranks recalled, “He (Dhoni) said that he wants to conquer his fear of heights so he wanted to join paras (Parachute Regiment) and do a para jump. So we assigned him 106 Infantry Battalion TA Para.  According to the standard operating procedure, Dhoni has to go through a minimum four weeks of rigorous military training. In the first two weeks, he will go through ground exercises and next two weeks will have special exercises along with instructions module of para jumping. At the end of four weeks, a senior military officer will decide whether Dhoni is fit to carry out para jumping.

Senior officials from Ministry of Defence on the condition of anonymity said, “We had received a request from Dhoni that he wishes to go for para-jumping. Since he (Dhoni) belongs to Para Regiment, he is entitled to it, if found physically and mentally fit.”

Confirming the reports, Additional Director General Maj Gen Surinder Singh said, “Lt Col Dhoni is currently going through  ground-training required to gain physical fitness for para jumping. After a few days of training, if everything goes well, he will take a jump.” He continued, “The actual date of jumping is not confirmed. It is under process.”