Dr. Renu Mundhara Soni, Dr. Garima Malik and Dr. Geeta Mehta give us a lowdown on what plants and seeds Lord Shiva liked.

Plants are nature’s major processors of solar energy which is vital for our existence. They yield also flowers, fruits, wood or medicines, and thus have been worshipped by the Hindus as a matter of gratitude.

Plants are regarded to be incarnations or symbols of God or deities and therefore their worship became more common. They play an important part in the myths and customs of India. Without the use of plants and their products the religious and cultural rituals are not completed.

Indians are highly religious and a variety of rituals related to worship of Gods, and Goddesses are performed round the year. Due to their ecological value and efficacious properties, trees continue to be used in the religious and social ceremonies of the Hindus. Different species of plants have special association with particular deities.

Shivaratri meaning ‘Night of Shiva’ is an important festival for the millions of devotees of Lord Shiva. Maha Shivaratri is the wedding day of the Lord Shiva and Mata Paravati, celebrated on the 14th day of the dark fortnight in the month of Phalgun (February-March). Worshipers of Lord Shiva on this night are absolved of all their sins and liberate them from the cycle of birth and death.

In Hindu mythology, Lord Shiva is the ‘God of destruction; the angry god. But at the same time, he is the also God of creation and his name means ‘auspicious’ implying that every disaster is followed by something good.

Lord Shiva lives the life of hermit in the wilderness of Mount Kailash and is clad in animal skin. He loves all wild things and thus the pretty flowers are never offered to him. Different species of trees also have special association with particular deities: Lord Shiva is worshipped with leaves of Aegle maramelos (bel patra), Cannabis (bhang); flowers of Calotropis (aak), Thevetia (peeli kaner); fruits of Datura, Zizyphus mauritiana (ber),seeds of Elaeocarpus ganitrus (Rudraksh) and Santalum album (sandal wood). 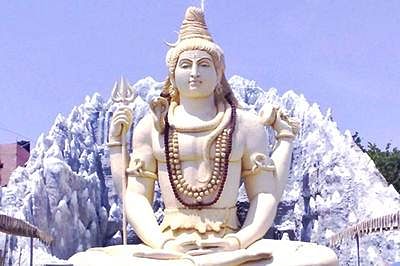 Religious association: Beal leaves placed on the head of Lord Shiva, or on his emblem the lingam, to cool the hot-tempered deity and is considered to be conductive to wellbeing and happiness, and the destruction of sins as well. The three leaflets of bael leaf considered as the three eyes or trident weapon of Lord Shiva and believed to be symbolic of the three main forces of life: creation, destruction and preservation. According to Skanda Purana bael tree originated from the sweat of Goddess Lakshmi or Parvathi which had fallen on the mountain Mandra. The beal tree emits positive frequencies and eliminates negative energies in the persons who come near it.

Religious association: Ber or jujube fruit is offered to Lord Shiva, as it is symbolic of longevity and gratification of desires.

Religious Association: According to Hindu mythology, bhang is linked with Lord Shiva. It is believed that Lord Shiva has his abode in the cold Himalayan region and kept himself intoxicated with bhang to meditate for long duration and stay warm. Some people also believe that bhang helps him in controlling his anger and thus world remain safe from his destructive power.

Religious Association: Shiv lingam or Shiv ling is the symbol of Lord Shiva and the devotees worship lingam in temples by offering water/milk/panchamrit to please Lord Shiva. After Jaal Abhishek, devotees smeared Lingam with chandan paste or make three parallel lines with chandan paste on the lingam. It is believed that Lord Shiva is always in a highly inflammable state, therefore, water and chandan paste is applied to Shiv linga to keep it cool and calm.

Religious association: Its flower and fruits are considered to be holy and are used in rituals and worship of God Shiva. Garlands made up of Datura fruits are offered to Lord Shiva. According to the Hindu religious text Vamana Purana, Datura is believed to appear from the chest of God Shiva. Shiva is also known as Vishdhari or Neel-kath because he drank poison for the welfare of the world that was churned out from the task of churning of the cosmic ocean between Dev and Asur. Therefore, it is believed that offering Datura to Shiva has its symbolic meaning. It is offered to Shiva to get rid of the poison of envy, terror, rivalry, foul language and wicked nature so that one can become pure and get rid of all sin.

Religious association: Like many other toxic flowers, the flowers of yellow oleander are immensely liked by Shiva and therefore used as offering during worship.

Religious association: Rudraksha is a gift of Lord Shiva for the benefit of mankind. According to “Shiva Purana”, Lord Shiva once went into deep meditation for the well being of all living creatures. When he woke up, he opened his eyes and tear drops fell on the Earth. These tear drops took the form of seeds that later on became the Rudraksha tree. Rudraksha therefore means ‘The Tear of Lord Shiva‘. Rudraksha possess powerful electromagnetic and inductive properties suggesting that the healing powers of Rudraksha beads flow from their electro-magnetic properties. It brings auspiciousness in wearer’s life and works continuously giving benefits.