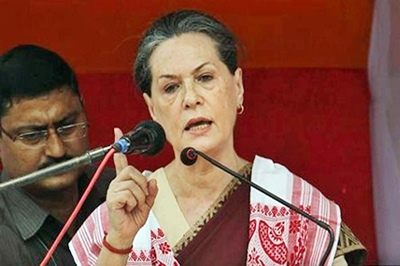 New Delhi: The Lok Sabha was adjourned for the day on Tuesday due to repeated protests by Congress members following the Delhi High Court summons to Congress leaders Sonia Gandhi and Rahul Gandhi in a case of cheating involving the National Herald.

Sonia Gandhi, who was on her seat, was seen gesticulating angrily from a distance to Minister of State for Parliamentary Affairs Rajiv Pratap Rudy, who met members who wanted to discuss the drought situation. As the house resumed its sitting after two adjournments, Deputy Speaker M. Thambidurai said Monday’s discussion on the drought would resume. But Congress members trooped near the speaker’s podium raising slogans.

The noisy protest came a day after the Delhi High Court dismissed the plea of Sonia Gandhi and Rahul Gandhi to quash a trial court’s summons to them in the Herald case. The Congress has termed it “petty vendetta politics of the BJP”. Rudy said the house and the country wanted to know what was the issue that was agitating Congress members.

He said it appears Congress members were upset over an “outside” matter. “The law of land is equal for all.” He said the government had no role in the case. Law Minister D.V. Sadanadna Gowda said the conduct of Congress members was “quite undemocratic”.

The deputy speaker asked Congress leader Mallikarjun Kharge if he wanted to speak. But Kharge refused, saying he had not been allowed to speak in the past. Rudy came up to Telangana Rashtra Samithi member A.P. Ramchandra Reddy and said Telangana had been impacted by drought.

A visibly angry Sonia Gandhi was then seen gesticulating to Rudy, seated some distance away from her seat. Rudy had a smile on his face. Rudy then said that Sonia Gandhi appeared to have objections to his talking to members of other parties. Sonia Gandhi also spoke to Trinamool Congress member Sudip Bandyopadhyay.