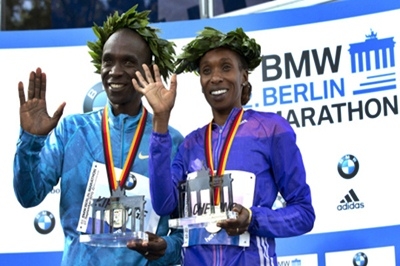 Berlin: Kenya’s athletes Eliud Kipchoge and Gladys Cherono won the 42nd Berlin Marathon on a sun-drenched autumn day. Eliud Kipchoge crossed the finish line in 2:04:01 to beat his personal best despite footwear problems, while Gladys Cherono won the women’s competition in 2:19:25. Germany’s best runner was Philipp Pflieger, who clocked 2:12:50, Xinhua news agency reported on Sunday. A total of 41,224 runners from 127 countries and regions participated in the Berlin Marathon. Kipchoge smoothed the victory with 10 kilometers to go, by pulling away from a six men group to gradually build up the lead against his rivals. The winner from this year’s London Marathon cruised to the victory at the Brandenburg Gate despite losing his insoles during the race. The 30-year-old Kenyan remained unimpressed by his footwear problems and crossed the finish line in 2:04:01, followed by compatriot Eliud Kiptanui in 2:05:22 and Ethiopian Feyisa Lilesa, who timed 2:06:57. Kenya’s Gladys Cherono won the women’s competition with a world leading time of 2:19:25, at her only second marathon. Meanwhile, Ethiopia’s Aberu Kebede finished second in 2:20:48, followed by compatriot Meseret Hailu in 2:24:33.