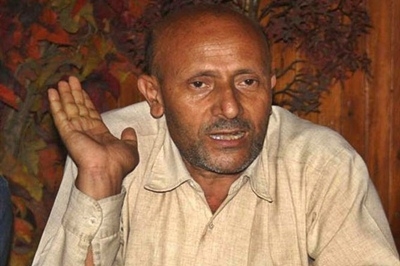 The legislator, who represents Langate constituency of Kupwara district, released black balloons tied with banners into the sky in a mark of protest, he said. The spokesman claimed that police used batons on the protesters in order to stop the march, leading to injuries to a party worker. The injured person has been admitted to SMHS hospital. Rashid had announced that he would stage a protest outside the venue of the Prime Minister’s rally at the Sher-e-Kashmir Cricket Stadium here. The stir would be over the issue of growing intolerance in the country, he had said, adding that he would also raise the demand for the resolution of the Kashmir issue.

Modi said that the people of Jammu and Kashmir have shown their faith in democracy (Jamhooriya). “There was massive participation in Lok Sabha and Assembly elections. Today Mufti Sahib is talking about empowering panchayats. This is the democracy that Atalji wanted and dreamt of. I salute you,” he added.  The Prime Minister said India is incomplete without Kashmiriyat which is the “shaan, baan, aan” (pride and glory) of India. He said he has a development sketch in his mind for Jammu and Kashmir based on the interactions with the leaders of the state including the Chief Minister and his deputy Nirmal Singh.

“The development process has to be implemented within a set timeframe. We want to help the farmers, the traders and people whose houses were damaged by the floods last year. We want to bring out every family from their problems. Delhi (the Centre) will work shoulder to shoulder with the state government in this regard,” he said. Modi said unemployment was the biggest challenge facing the state and a solution to this problem will resolve every other problem in the state. He said the focus of the government is on reviving tourism and promoting handicrafts and other cash crops like apple and saffron of the state.

“More than 1.75 crore Indians travel abroad for tourism. Can we make efforts to get only 5 per cent of this number to Kashmir, which will change the tourism scenario and bring back the old days of peace and tranquility,” he said. The Prime Minister said the state had potential for adventure tourism, eco tourism and leisure tourism to attract visitors from across the world. Giving an example of harnessing the local expertise, Modi said cricketers like Sachin Tendulkar, Yuvraj Singh, Virender Sehwag and Dhoni might have hit many sixes but the bats they used were made from the willow of Kashmir.

“This is strength which we need to harness. We want a development model which provides livelihood opportunities to the youth,” he said. Modi also laid emphasis on use of information and digital technology for improving the lot of the people. “We have to explore who to use the I-way, the information way, and digital network to connect the people of Kashmir. As part of skill development, we have to look at how to improve the quality of handicrafts and their designs too, besides finding global markets for these products,” he added.

Modi said there was no reason that Kashmiri cannot emerge from its troubled past as “I believe that crisis, however deep it might be, can be over come with determination”. “Kashmir has seen a lot of crisis over the past 20 years. Dreams of two generations have been shattered. I have set out to make Kashmir paradise on earth again, to make it prosperous. I have belief in Mufti Sahib…. I have belief in you. Otherwise, we would not see such an atmosphere (at the rally),” he added.

Turning his focus on infrastructure development, the Prime Minister said his government wants to develop the sector. “Today it takes nine to 11 hours to travel from Jammu to Srinagar, which can put off the tourists. We are spending Rs 34,000 crore on Jammu-Srinagar road which will reduce the travel time significantly as the distance will be less by 70 kilometres due to construction of tunnels,” he said.

He said this project will be completed within two and half years. On the human resources, he said the youth of state have excelled in the competitive exams like IAS, IPS, IIT and IIM over the past few years which is indicative of the strength of the state. “I have recognised this talent of Kashmir and when I recognise the talent, I do everything that is needed to be done,” he said. The Prime Minister also pitched for resumption of international cricket in Kashmir saying if a player like Parvez Rasool is making progress, then international matches should also return. “It has been 30 years since an international match was played here,” he said referring the Sher-e-Kashmir Cricket stadium, where the last one day international was played between India and Australia in 1986.