If BJP wins in Bihar, it will abolish quota policy: Nitish Kumar 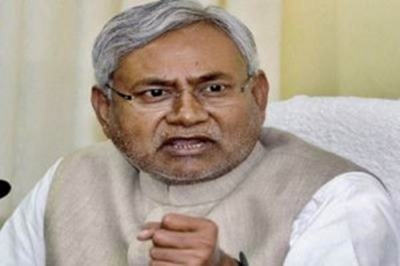 Bihar Chief Minister Nitish Kumarclaimed that the BJP-led coalition at the Centre will abolish reservation for OBCs, SC and STs if it wins state assembly elections after RSS chief Mohan Bhagwat called for a review of the quotas.

“The RSS chief has publicly called for review of the reservation policy which the BJP-led coalition at the centre may scrap if NDA gets power in Bihar,” Kumar alleged at an election rally in Parbatta Assembly constituency in Khagaria district.

The victory of the BJP-led alliance will embolden NDA to toe the RSS line and scrap the existing reservation policy, he alleged. Kumar promised 35 per cent reservation to women in government jobs if his alliance (JDU-RJD-Cong) comes back to power at the hustings. He also took umbrage against BJP and Prime Minister Narendra Modi in particular for ridiculing him on his Rs 2.70 lakh crore vision for development of the state over next five years.

“You don’t worry about how we will raise resources. We have enough sources of revenue to fulfil aspirations of the people on development front,” Kumar said.

The Chief Minister said he has charted out the vision document after taking into account various sources from which revenue will be raised in coming years and not from any dole by anybody, he said referring to the Centre.

The Prime Minister had ridiculed Kumar’s vision document last month and asked him from where he will raise funds to implement his development agenda. The senior JD(U) leader, flayed the NDA government for “non-fulfilment” of promises, including bringing back black money from foreign shores, and asked the Prime Minister what happened to his poll promise to deposit Rs 15 to Rs 20 lakh cash into bank account of every individual.

Kumar also slammed the ‘Gujarat Model’ of development, a plank on which Modi had won the Lok Sabha poll last year, and alleged the pitiable condition of women and prevalence of unemployment in the PM’s native state tell a different story. In all, the Chief Minister addressed five election meetings during the day.