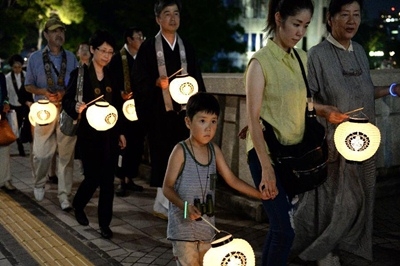 Tokyo: The residents of Japan’s Hiroshima city on Thursday commemorated the 70th anniversary of the first atomic bomb dropped by a US aircraft on this day in 1945.

The crowd observed a minute of silence at 8:15 a.m., the exact time the US B-29 bomber Enola Gay dropped the atomic bomb, which exploded some 600 metres (1,800 feet) above the city on August 6, 1945, state-run news agency NHK reported. The Hiroshima bombing — and a second one in Nagasaki three days later — is credited with ending the Second World War. It claimed the lives of at least 140,000 people in Hiroshima city.

At least 55,000 people, including Japan Prime Minister Shinzo Abe, Hiroshima mayor Kazumi Matsui and some of the survivors, were present at the Peace Memorial Park for the annual ceremony. Prime Minister Abe expressed his commitment to global dialogue. He said Japan will continue to seek cooperation from both nuclear and non-nuclear countries to do even more to achieve a world without nuclear weapons. Abe said that to demonstrate this determination, Japan will introduce a new resolution at the UN General Assembly seeking the abolition of nuclear weapons. Matsui called nuclear weapons “an absolute evil” and “ultimate inhumanity”.