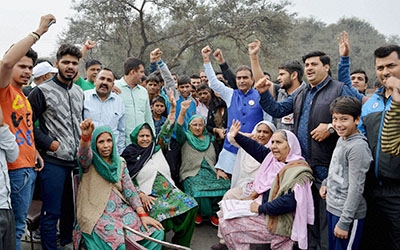 Gurgaon: People of Jat community block the Delhi road in Gurgaon during their agitation for reservation on Saturday. PTI Photo (PTI2_20_2016_000186B) |

Chandigarh: Haryana was again on the edge today with the 72-hour deadline set by Jats for resuming their agitation over quota from tomorrow set to come to an end tonight.

Paramilitary forces and police were out in the sensitive districts and carrying out Flag Marches in various places as the 72-hour deadline given by various Jat organisations to the BJP-led Haryana government was coming to an end later today. Various Jat organisations had on Monday threatened to resume their quota agitation, which rocked the state last month and claimed 30 lives, if the Manohar Lal Khattar government does not meet their demand by today.

The Centre has sent 80 companies (about 800 personnel) of paramilitary forces to the state which are being deployed in sensitive areas like Rohtak and Jhajjar districts, which were the worst-affected during the first phase of the agitation last month.

The security forces personnel are also conducting Flag Marches to instill confidence among the public in view of large-scale arson and violence witnessed last month. “We have already got the paramilitary force. The police is on the alert and we are making all arrangements (to aintain law and order),” IGP, Rohtak Range, Sanjay Kumar said today.

He said additional police forces had also been arranged from within the state for deployment in the sensitive areas in and around Rohtak. “We have made adequate police security arrangements. We have adequate force and we are deploying it accordingly,” he said.

Asked about the situation in Rohtak, Jhajjar and some other areas worst hit by recent unrest, the IG said, “at present the situation is normal.” Reports said that authorities have stepped up security with deployment of additional security personnel in many towns, including Jind and Sonipat as the deadline issued by the Jat community to accept their demand for quotas ends today.