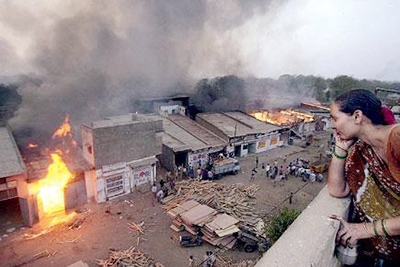 Ahmedabad: The special judge hearing the case related to the 2002 Gulberg Housing Society riot, in which 69 people including former Congress MP Ehsan Jafri were killed here, today said he would start writing the verdict now. After the defence provided clarification on some points as sought by him, the judge P B Desai concluded the hearing. He directed both the prosecution and the defence lawyers to remain present to answer the court’s queries whenever called.

In the final submission today, the defence refuted the prosecution’s theory of prior conspiracy, and reiterated that the mob turned violent only after Jafri fired several rounds at it from his revolver.

Last week, advocate S M Vora, representing the riot survivors, had argued that the attack was a pre-planned criminal conspiracy. The accused police officer K G Erda, the then police inspector of Meghaninagar station, did not stop the rioters from entering the Society, he had alleged. Today, defence lawyer Abhay Bhardwaj argued that the mob, which had begun to gather outside on the morning of February 28, 2002 (a day after the Godhra train burning incident), turned violent at around 2 pm when Jafri fired at people. One person was killed and several others were injured, he said.

About 15,000 people had gathered outside the Society but nobody had called them there through any conspiracy and the people had gathered on their own, advocate Bhardwaj said. Had there been any common intention to kill the Muslims (in the Society), then the mob would have done that in the morning and would not have waited till afternoon, he said.