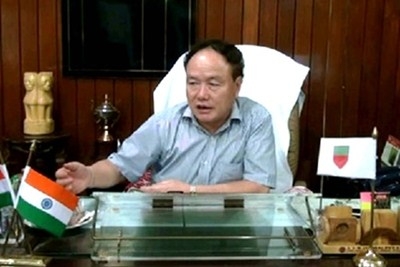 Guwahati/Itanagar: In a new twist to the ongoing political drama, the Gauhati High Court today kept in abeyance all decisions, including the removal of Arunachal Pradesh Assembly Speaker Nebam Rebia, at a special “session” yesterday, hours after Chief Minister Nabam Tuki was “voted out” and a dissident Congressman was “elected” as CM in a hotel.

Coming down heavily on the notification issued by Governor J P Rajkhowa advancing the session, Justice Hrishikesh Roy observed that prima facie it was in violation of Art 174 and 175 of the Constitution dealing with convening of the session by the Governor and his message to House.

The court order came on a writ petition filed by the Speaker challenging the December 9 notification issued by the Governor advancing the Assembly session to December 16 from the scheduled day of January 14, 2016. Earlier today, in a bizarre turn of events, Opposition BJP and rebel Congress MLAs got together in a local hotel to “vote out” the Nabam Tuki-led Congress government in Arunachal Pradesh and to “elect” a rebel Congress MLA as the new “chief minister”.

The dramatic development came a day after they “impeached” Speaker Nabam Rebia in a make-shift “Assembly” premises in a community hall.

Issuing notice, Justice Hrishikesh Roy kept in abeyance the impugned decisions including the notification issued by the Deputy Speaker restoring the membership of 14 suspended MLAs and the holding of the “session” at a new place and also the decision taken at the “session” yesterday in which the Speaker was removed.

The judge allowed petitioner Kapil Sibal to implead the government of Arunachal Pradesh as a party respondent. He posted the case for next hearing on February 1, 2016. Eleven BJP MLAs and two Independent MLAs joined hands with 20 Congress rebels to meet at a conference hall of a hotel here as the Assembly premises have been sealed since yesterday.

Today, a “no confidence” motion moved by BJP MLAs and Independent MLAs was “adopted” with Deputy Speaker T Norbu Thongdok, who is also a rebel Congressman, in the Chair. A total 33 members of the 60-member House, including 20 dissident Congress MLAs, later “elected” another dissident Congressman Kalikho Pul as the new “chief minister” of the state.

The Chief Minister Nabam Tuki and his 26 supporting MLAs boycotted the proceedings terming them as “illegal and unconstitutional”.