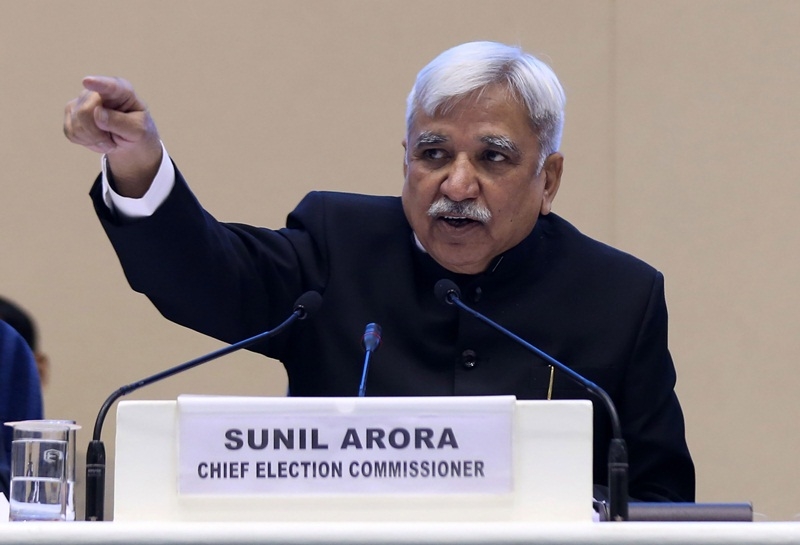 New Delhi: In its bid to conduct eco-friendly elections, the Election Commission (EC) has directed all political parties and their candidates to desist from using environmentally hazardous publicity materials like plastics and polythene in the election campaign for the Lok Sabha polls.

“Commission has directed political parties and candidates to desist from using environmentally hazardous publicity material and promote usage of eco-friendly substances for the preparation of election campaign material. This is a kind of appeal to everybody,” said Chief Election Commissioner (CEC) Sunil Arora here on Sunday. The stakeholders are also advised not to use environmentally hazardous materials like plastics, polythene etc for the preparation and usage election-related publicity materials during these elections.

“The DEOs and ROs are directed to emphasize the importance of environmental protection and preservation during the meetings with the political parties and contesting candidates and ensure that the instructions of the Commission with regard to the restrictions on the usage of non-eco-friendly materials like plastics, polythene etc. during electioneering shall be adhered to by all concerned,” said a press note by the Election Commission.

Also, in the backdrop of widespread and flagrant use of loudspeakers during election canvassing and campaign by candidates, political parties and their agents, the Election Commission has prohibited the use loudspeakers at night between 10 pm to 6 am. “The Commission has directed that the use of public address system or loudspeakers or any sound amplifier, whether fitted on vehicles of any kind whatsoever, or in static position used for public meetings for electioneering purposes, during the entire election period starting from the date of announcement of election and ending with the date of declaration of results, shall not be permitted at night between 10 pm and 6 am,” said the CEC.

Further, no loudspeakers fitted on vehicles of any kind or in any other manner whatsoever shall be permitted to be used during the period of 48 hours ending with the hour fixed for the conclusion of the poll in any polling area. Election Commission of India (ECI) on Sunday announced the schedule for the 17th Lok Sabha election, which will be held in seven phases beginning April 11. The final phase of voting will take place on May 19. The counting of votes will be done on May 23.