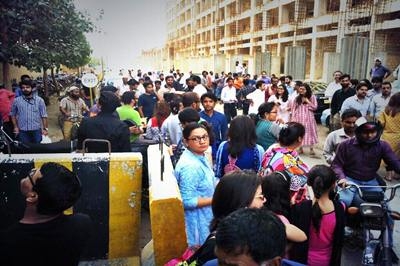 New Delhi : The India Meteorological Department on Saturday said that the national capital felt a tremor of 5 on the Richter scale, with the epicentre of the earthquake in Nepal.

“An earthquake of magnitude 7.5 was observed 77 kilometres North West of the capital of Nepal, Kathmandu. The depth of this earthquake was ten kilometres and the co-ordinates 28.1 and 84.6.,” Met Department director general L.S. Rathore said. “More intense shocks were observed in Eastern UP, Bihar, sub-Himalayan and Himalayan West Bengal and Sikkim. The tremors were also felt in the entire North India including Delhi, Jaipur, Dehradun and so on,” he added. Rathore also said that an aftershock of 6.6 on the Richter scale hit the area.