Donald Trump drops a bomb: Bar Muslims’ entry to US 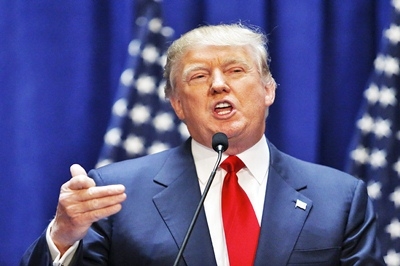 Washington: Republican presidential front-runner Donald Trump sent shock waves through the political establishment with a call to bar Muslims from entering the US until lawmakers figure out what is going on.

“Donald J. Trump is calling for a total and complete shutdown of Muslims entering the United States until our country’s representatives can figure out what is going on,” a campaign press release said.

Trump, who has previously called for surveillance against mosques and said he was open to establishing a database for all Muslims living in the US, made his controversial call in the wake of last week’s mass shooting in California by a Pakistani origin couple.

Many of his Republican presidential rivals slammed Trump with former Florida Governor Jeb Bush tweeting that “Donald Trump is unhinged and his “policy” proposals are not serious.”

But many of his supporters showed their approval via social media as well as at his rally on Monday night.

“Without looking at the various polling data, it is obvious to anybody the hatred is beyond comprehension. Where this hatred comes from and why we will have to determine,” Trump said in a statement.

“Until we are able to determine and understand this problem and the dangerous threat it poses, our country cannot be the victims of horrendous attacks by people that believe only in Jihad, and have no sense of reason or respect for human life.”

Obama’s deputy national security adviser Ben Rhodes criticised Trump’s call as “totally contrary to our values as Americans” and pointed to the Bill of Rights’ protection of freedom of religion.

Democrats were quick to condemn Trump’s call, with Vermont senator Bernie Sanders and former Maryland governor Martin O’Malley both calling him a demagogue.

Democratic front-runner Hillary Clinton, in a signed message, tweeted, “This is reprehensible, prejudiced and divisive. @RealDonaldTrump, you don’t get it. This makes us less safe. -H”

USA Today in an editorial calling “Trump, fear-monger in chief” suggested “he apparently doesn’t care about turning himself into a threat to national security.”

Noting that “rivals from both parties leaped to denounce Trump’s outrageous comment, the latest in an ever-escalating flood of fear-mongering,” it said the Republican Party “can only hope that Dec 7 turns into Trump’s Pearl Harbour Day.”

The Washington Post cited legal scholars as saying Trump’s proposal to bar all Muslims from entering the US “violates US and international law and would never be allowed by the courts.”