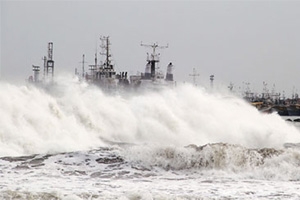 Visakhapatnam:  With cyclonic storm Hudhud set to hit the Andhra coast Sunday, the authorities are preparing to evacuate more than 200,000 people in four coastal districts to safer places.

According to Indian Meterological Department (IMD), the cyclone is lying 330 km southeast of Visakhapatnam and 380 km south-southeast of Gopalpur Saturday morning.

Fifteen teams of National Disaster Response Force (NDRF) and 250 personnel of army have reached the region while four naval ships and 10 helicopters of Indian Navy and Indian Air Force (IAF) are ready for rescue and relief operations.

The evacuation of people from coastal and low-lying areas will start later in the day. Officials said the number of people to be evacuated would depend on the weather conditions.

Winds along the coast are gathering momentum while sea conditions have turned rough. Visakhapatnam Cyclone Warning Centre has forecast rains from Saturday afternoon.

It has warned of rainfall at most places with heavy to very heavy falls at a few places and isolated extremely heavy falls over West Godavari, East Godavari, Visakhapatnam, Vijayanagaram and Srikakulam districts of north Andhra Pradesh and eight districts of south Odisha during next two days.

Fishing operations have been suspended along the coast as authorities have warned fishermen against venturing into sea.

As there is no possibility of cyclone changing its course or its weakening, , Chief Secretary I.Y.R. Krishna Rao directed officials to be ready for cyclone relief measures on war-footing.

He said BSNL and other telecom service providers were urged to issue cyclone alerts to people living in coastal areas.

Coast Guard, Coastal Security wing, Marine Police, and also superintendents of police were asked to be alert in view of cyclone and assist the District administration.

The authorities have set up over 200 relief camps to provide shelter to people to be evacuated from vulnerable villages. The government has cancelled leave of all employees and those who were on leave were asked to immediately return to the duties.

The district collectors said they have made arrangements to stock fuel, drinking water, food, medicines and other essential commodities for rescue and relief operations.

As a precautionary measure, the railways have cancelled over 60 trains and diverted many others in view of the cyclone.