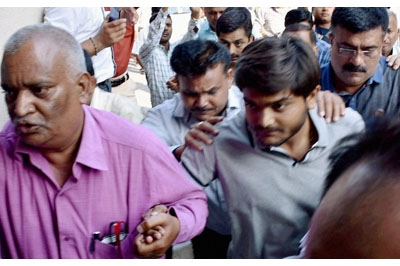 Ahmedabad: A local court will hear the bail plea of Patel quota agitation spearhead Hardik Patel and two of his aides tomorrow in a sedition case as the matter was adjourned today. Additional Sessions Judge N G Dave adjourned the hearing in the case today. Hardik and his aides Dinesh Bambhaniya and Chirag Patel, who are facing sedition charges and are presently lodged in jail, had filed their bail application last month.

In the bail plea, the trio had alleged that the FIR against them is fabricated and the quota agitation led by them does not amount to sedition, as charged in the FIR against him by the city crime branch on October 21.

In response to the bail application of these Patidar Anamant Andolan Samiti (PAAS) leaders, the city crime branch had filed an affidavit in the court on November 26 and opposed their bail plea.

In the affidavit, crime branch alleged that all the accused are facing serious charges and evidences collected till date proves their active involvement in committing crime of inciting Patel community youths to resort to violence after their mega rally on August 25 here, which resulted in state-wide riots and loss of public property worth crores.

Crime branch pleaded to the court that the trio should not be released on bail, as they might indulge in similar activities and also try to temper the evidences after coming out on bail.

The crime branch had charged these Patel leaders under IPC sections 121 (waging war against government), 124 (sedition), 153-A (promoting enmity between different communities) and 153-B (assertions prejudicial to national integrity).

However, the Gujarat High Court had recently removed section 121, 153-A and 153-B from the FIR. A total of six PAAS leaders– Hardik, Dinesh, Chirag, Ketan Patel, Amrish Patel and Alpesh Kathiria– were made accused in this FIR. Out of them, Dinesh, Chirag and Ketan are behind bars, while Hardik is currently in custody of Surat police in another case. Amrish and Alpesh are not arrested yet after the high court’s relief to them.