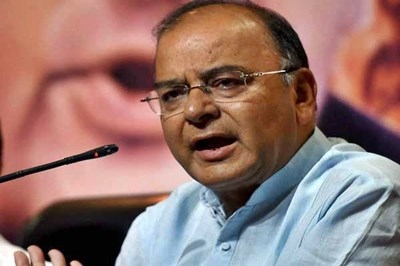 New Delhi: Accusing the Congress of being anti-development, union Finance Minister Arun Jaitley on Monday said the issue of External Affairs Minister Sushma Swaraj was being used as a pretext by the opposition party to stop the passage of the GST Bill.

“The government observes that in the pretext of Sushma Swaraj, the real motive of the Congress is that they don’t want the GST Bill to be passed. They want India’s growth to suffer,” Jaitley told reporters outside parliament.
“Delay in implementation of the GST (goods and services tax) and continued disruption in parliament will have an adverse impact on India’s growth,” he said.  Jaitley also criticised Congress president Sonia Gandhi for her adamant stand in both the houses of parliament.

“(Lok Sabha) Speaker Sumitra Mahajan today (Monday) called an all party meeting. Except the Congress, all the opposition parties want that the house should function. “Even most of the Congress leaders are against disruption in parliament but their two top leaders want to stall the house,” Jaitley said. Jaitley said the Congress’s priority had never been to strengthen the economy of the country. “Instead, they want to hurt country’s economic growth story.”