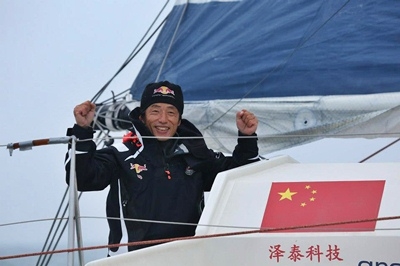 Murmansk (Russia): Guo Chuan, the first Chinese sailor who completed a non-stop solo circumnavigation in a 40 feet yacht, is expected to set sail on Thursday aboard his “Qingdao China” multihull for an unprecedented non-stop navigation through the Northeast Passage of the Arctic Ocean.

Guo and his international crew arrived on Sunday at Murmansk Port of Russia, the starting point of the navigation across the Arctic Ocean, reports Xinhua news agency. There will be four experienced sailors to accompany Guo. Boris Herrmann is the youngest crew in the team and one of the greatest sailors in Germany presently. Jochen Krauth and Quentin Monegier are from France and both are experienced in top-class international sailing events.

Sergei Nizovtsev earns his nationwide fame in Russia as an exploring legend, and Tim Frank from Germany will be media crew on the boat. Guo and his teammates will begin to cross the Arctic Ocean for 3,300 nautical miles without stop, supply and engine power of yacht from the Murmansk Port. With extreme weather and lots of ices, only icebreaker are seen in the sea-route of the Arctic Ocean all the time. Guo said it was not only an attempt to create a new world record, but more importantly, it was a journey to showcase peace and sportsmanship.