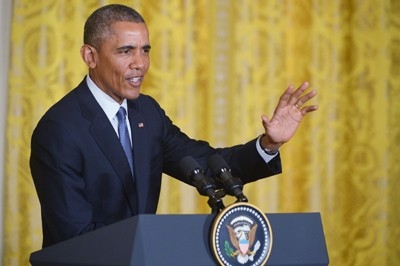 Washington: President Barack Obama today said the US is the best place to invest and not China as he invited start-ups around the world to work and develop their ideas in the country.

“Today, America is home to more high-tech companies than anyplace else in the world. And business leaders have declared that China is no longer the world’s number one place to invest – America is,” Obama said in his remarks at the first White House Demo Day. “With technological advancements like cloud computing and big data and 3D printing, the fact is, there has never been a better time to launch an idea and bring it to scale right here in the US, right now,” he said in presence of several path- breaking start-up companies a few of which were belonged to Indian-Americans.

“I’m very excited,” Obama said after having a demo of the solid state lithium batteries. “Here in this room, we’ve got some of the best and brightest entrepreneurs America has to offer, folks from all across the country who are working every day to transform the way we live and learn and communicate. They have taken over my house,” he added. Among the Indian-American entrepreneurs were Privahini Bradoo from San Francisco, Ann Marie Sastry from Michigan and Suma Reddy from New York. While Bradoo’s BlueOak recycles electronics and mobile phones, Sastry has founded a company by the name of Sakti that is using materials science to develop the next generation of solid state lithium batteries that will power mobile phones, computers, and even cars. Reddy’s Waddle is a mobile, friend-to-friend discovery
platform to help find the best places to go by using friends’ ratings, reviews and recommendations.